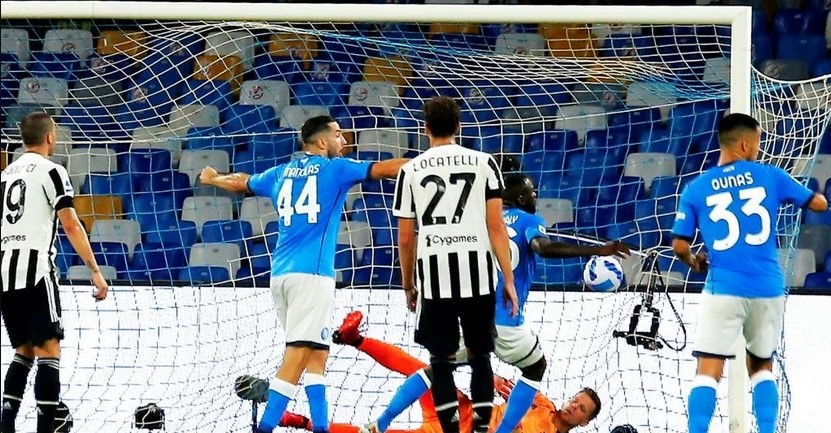 Kalidou Koulibaly made sure that Juventus’ miserable start to the season continued on Saturday with the late winner in a 2-1 triumph for Napoli that put them top of Serie A.

Senegal captain Koulibaly knocked home the winning strike from practically on the goal line with five minutes to go at the Stadio Diego Armando Maradona to maintain Napoli’s 100 percent start and move them three points clear in first place.

Matteo Politano levelled near the hour mark after Alvaro Morata had put a depleted Juve ahead early on.

Koulibaly, 30, won the match for Napoli after reporting for training immediately following his return to Italy from World Cup qualifying wins for his country over Togo and Congo.

After netting the winner he snatched a camera from a pitch-side photographer to take a snap of the celebrating fans behind the goal.

“I saw all the fans celebrating and wanted to take a picture as it was so beautiful,” said Koulibaly to DAZN.

“The win is for them as we were without them for a year and when we see them like that we’re all happy.”

Defeat for Massimiliano Allegri’s Juve meanwhile drops them down to 16th place in Italy’s top flight after a second straight defeat which leaves them with a single point from their first three matches.

“That’s the way things are going right now. I couldn’t have asked more from the players tonight,” insisted Allegri, whose team travel to Malmo in the Champions League on Tuesday.

“Right now errors are making things difficult for us… we are being made to pay for every mistake we make. All we can do is keep working.

“Let’s hope that we can begin the Champions League better than we have the league season.”

Juve had come into the match against one of their fiercest rivals off the back of an embarrassing home defeat to Empoli and the sudden departure of Cristiano Ronaldo before the international break.

It was one of the players charged with filling the goalscoring gap left by Ronaldo who gave Juve the lead, Morata robbing a dozing Kostas Manolas before racing through to slot home the 10th-minute opener.

It was another error that allowed the hosts to level in the 57th minute, this time from goalkeeper Wojciech Szczesny who could only pat Lorenzo Insigne’s weak shot at the feet of Politano.

Italy international Politano was presented with a tight angle but managed to squeeze his low shot under the scrambling Szczesny.

And Koulibaly sent the home fans into raptures when Szczesny, who did well to stop substitute Moise Kean from scoring an own goal on his return to the Juve side, couldn’t prevent the ball ricocheting off the imposing centre-back and into the net.

In Saturday’s early game, Venezia got their first points of the season after running out 2-1 winners at fellow promoted team Empoli.

Atalanta host Fiorentina in Saturday’s late match, while Lazio, Inter Milan, Roma and AC Milan will also attempt to maintain their perfect starts when they play on Sunday.