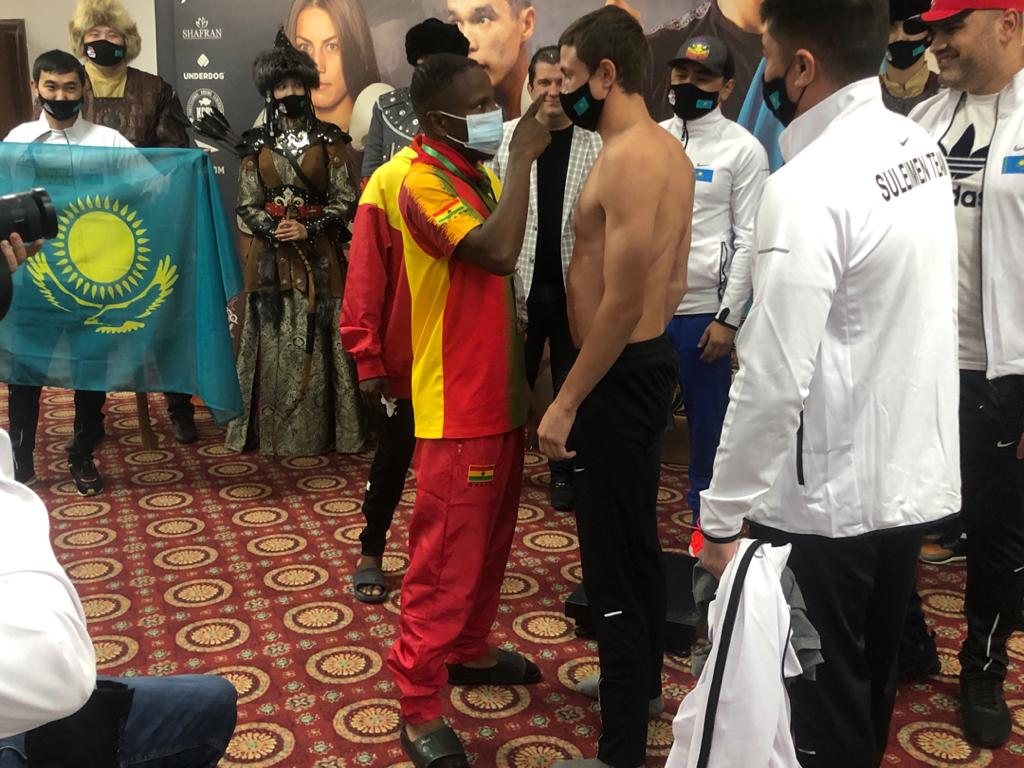 On Saturday, the Ghanaian and his opponent met face to face at the pre fight weigh-in and both did pass the test, Sackey coming in at 54.8 kg, slightly lighter than the also taller Pavlov who scaled 55.3 kg, setting up the ‘Battle of Nomads 2’ cliffhanger in the Kazakhstan capital put together by Suleimen Promotions.

Isaac Sackey and Yevgeniy Pavlov pose for the cameras after their successful weighs for Sunday’s fight in Astana, Kazakhstan

Sackey who is accompanied by his trainer, Osmanu Nii Armah Brew and manager, Evans Bernie-Johnson, has been talking tough amid full assurance he will return to Accra with the WBA belt in tow, notwithstanding the fact he is fighting outside the Ghana capital for the first time in his 27-fight pro career, as well as the opponents’ reach and height advantages.

“The weather is okay, we will mange because we are bringing this title to Ghana, that’s the reason why he (Sackey) was kissing the belt if you see the weigh-in video, and pointing out that he was taking the title back home. He told the boxer and the promoters that he’s taking the title to back Ghana and that’s just what we are here to do,” Sackey’s manager, Evans Bernie-Johnson told Sportsinghana.com from the European country.

“He says you can’t prove yourself in your comfort zone, yes Ghana is his comfort zone so you have to go outside and challenge yourself to prove to the whole world that he is the best super bantamweight. So he is just bringing this WBA belt back to Ghana alongside his belts,” Mr. Bernie-Johnson added.

Sackey, currently rated number 12 in the WBO world rankings on the back of being the Africa champion, is looking for victory over the WBA number 9 rated Pavlov and with it entry into the WBA world rankings and a step closer to the much cherished world title dream.

“Yes the ultimate target is the world title and we are starting that journey from here. Ghanaians should pray for us to bring this titles back to Ghana, we plead with them to remember us in their prayers, thank you,” he said.