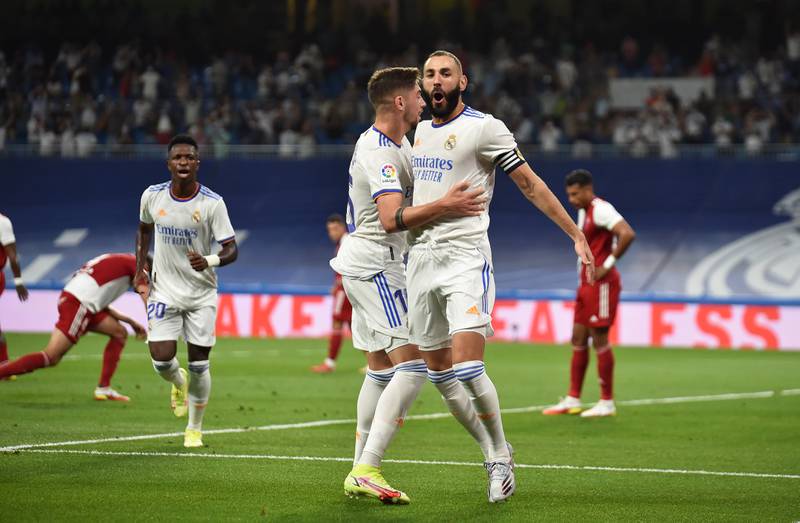 Real Madrid returned to the Santiago Bernabeu after 560 days away and Karim Benzema ensured it was a happy homecoming as his hat-trick inspired a thrilling 5-2 fightback against Celta Vigo on Sunday.

Benzema twice had to pull Madrid level after Santi Mina and Franco Cervi each put Celta ahead, goals that were greeted with whistles inside the Bernabeu where 19,874 fans attended for the first time in a year and a half.

But Benzema kept his team in it and Madrid motored in the second half, Vinicius Junior finishing after racing onto the France forward’s through-ball before Eduardo Camavinga marked his debut by tapping into an open net.

Benzema completed his hat-trick by converting a penalty in the 87th minute, to make it five goals and two assists from his opening four games this season.

“What wasn’t so clear was the defensive organisation, which has to improve.”

Antoine Griezmann’s return was less impressive, his first game for Atletico Madrid in two years and four months coming against Espanyol, who sank to a 2-1 defeat after a 99th-minute winner from Thomas Lemar. Griezmann had gone off in the 58th minute with his team trailing.

Valencia sit level with Atletico and Real Madrid on 10 points after they continued their strong start under new coach Jose Bordelas with a 4-1 win away at Osasuna.