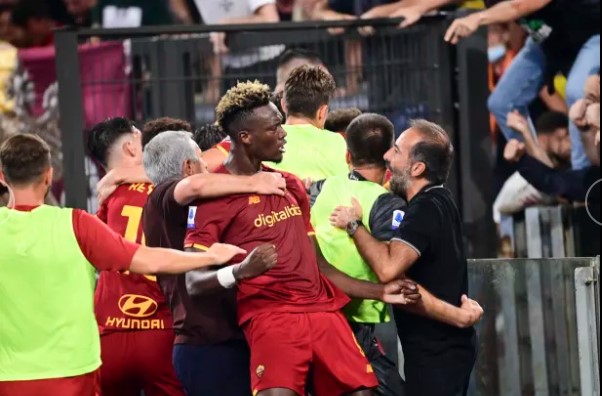 Jose Mourinho was made to wait until the dying minutes before he was finally able to celebrate a win in his 1000th game in management.

And what a celebration it was: the Portuguese coach sprinting down the touchline to celebrate with matchwinner Stephan El Shaarawy as he made his way to the Curva Sud.

Bryan Cristante scored Roma’s other goal on the night, as the Giallorossi edged to a 2-1 win that moved them to the top of the early Serie A standings.

Here’s what the boss thought about the game…

When you run down the sidelines it means it was a special moment – why was El Shaarawy’s goal so special for you?

“Because during the week I was lying to people, telling everyone this wasn’t a special game – perhaps I was trying to convince myself as well. But actually it was – this game had a really special meaning for me. And I am sure I will remember it for the rest of my life, because my 1000th game as a coach was this one.

“I didn’t want to lose it, and I was very scared of having that be my lasting memory of the moment. So I was lying to everyone beforehand. It was an very special feeling.

“Today it could have finished 6-6 or 7-7, they could have won 2-1, whatever. In the final few minutes Rui Patricio made two or three incredible saves and we missed two or three chances when the goal was gaping. It was an incredible game for the neutral, an absolutely extraordinary match, with so many emotions to it.

“Today I wasn’t 58 years old, but 10 or 12 or 14, when you start dreaming about a career in football. Running like I did [down the sideline], I was running like a child. And I apologised to [Sassuolo coach Alessio] Dionisi for that. I congratulated him and his players: they played brilliantly. Tonight we won, but if they had won I would not have been able to have any complaints.”

Do you know that this is the first time in your career you have won the first five games at a club?

“No, I didn’t know that. It’s the same as the milestone of 1000 games – I only realised when I was eight or seven short. They are not numbers I’m particularly interested in.

“Obviously I’m happy with the three points, and the great spirit we showed. But we cannot ignore Dionisi and how he must feel: He’s a great coach, Sassuolo have a real identity about them – one that comes from De Zerbi, but he has applied his own elements to that. They are a great squad; I realised that as soon as I started studying them.

“These are three massive points for us. Perhaps God decided that I didn’t deserve to have a negative memory of this particular game.”