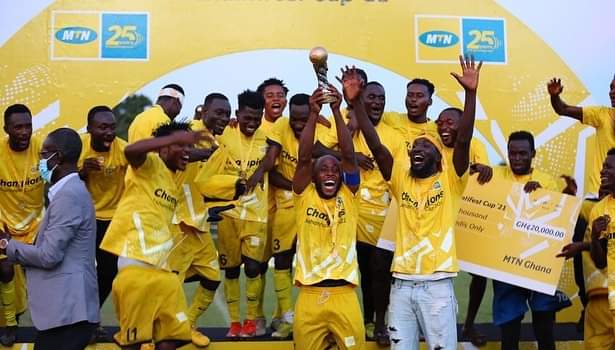 Abrepo were crowned the 2021 MTN Ashantifest Cup champions after seeing off Kotei Deduako 5-4 on penalties in the final at the Paa Joe Stadium inside the Kwame Nkrumah University of Science and Technology (KNUST) campus, Kumasi at the weekend.

The two sides couldn’t be separated in regulation time following a goalless stalemate, there was no choice than to resort to the dreaded penalty shootout to find the winner, which of course was Abrepo.

In all, eight teams from across Kumasi competed for honours in the community football championship which was organised as part of the 2021 Ashantifest. The communities were Kotei Deduako, Fante New Town, Asafo , Tech, Bantama, Dichemso, Asokore Mampong and Abrepo of course.

The 2021 edition of the Ashantifest coincides with the 25th anniversary of MTN Ghana. In view of that the company has pledged to invest an amount of 207 million dollars to enhance its operations across the country.

Below are more photos from the presentation: