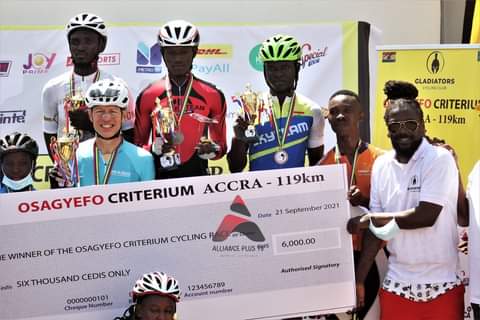 The Gladiators Cycling Club in conjunction with Ghana Cycling Federation organised a 119km road race at Osu in Accra yesterday. In all over 50 cyclists from different clubs registered to compete for the ultimate champion.

The ladies too were not left alone in the fun and it was to celebrate the Founders Day which was a holiday and to help it Gladiator’s Cycling Club decided to help raise cycling in Ghana.

The plan for this championship was done only three weeks by the organisers through one of their Executives by name Andrew Kankam.

Grand Papa of Dancehall, Samini also graced the occasion and after being interviewed by the media, he stated his love and passion for cycling which always boosts his mind when it’s time to write his lyrics for his songs.

The race was keenly contested and in all the Cyclists were supposed to go through the Accra Sports Stadium to the Ministries Traffic Light then to National Theatre and turn towards the Liberation Roundabout , drive through towards the Military Cemetery then to the finish line at Osu Stadium Shell Filling Station.

One road lap is 3.39km and they need to do it for 35 times making it 119km. The various clubs brought out their best cyclists for the Osagyefo Criterium Cycling Championship.

The Osagyefo Criterium Cycling Championship was at its best with a super photo finish from 5 cyclists to end the day. The cameras were there and were able mark out the winner clearly.

The youngest cyclist went to Belinda Kutiame who was 16yrs and competed in the ladies event which was won by Clementina Ayoung who was presented with 2,000gh , a trophy,wall clock,a medal and some products of Lucozade.

The masters Category was won by J.B Dawam, who went home with 1,000gh, a medal and some products of Lucozade Energy.

All the Cyclists who participated and registered got a medal to take home.

As well, there were prizes presented to cyclists from the Sixth position to the Twentieth with all given 200gh with some products of Lucozade Energy.

The Technical Director of the Ghana Cycling Federation, Mr Shabaan Mohammed with some national executives officiated the Osagyefo Criterium Cycling Championship which was organised by Gladiators Cycling Club.