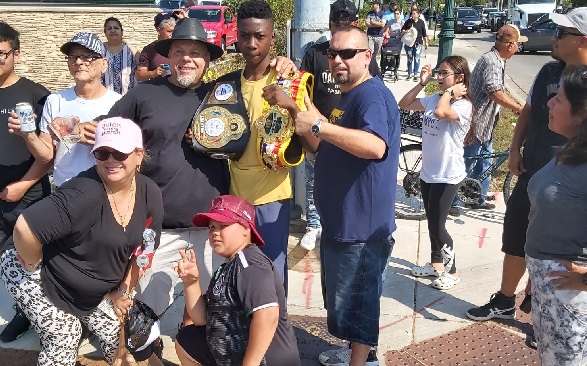 American-born Ghanaian juvenile boxer, Joseph Awinongya Jnr, has formally been introduced to the people of Joliet as a role model in Illinois by the Mayor, Bob O’DeKirk.

The 14-year-old fighter was introduced on September 18 during a Mexican  Independence Parade in Joliet.

Mayor O’DeKirk in his introduction described Awinongya Jnr as an amazing boxing talent who keeps putting the city on the map through hard work.

“It is my honor to introduce to this city this young man Joseph Awinongya Jnr, an amazing talent in boxing who keeps working hard to put Joliet in the news for the right reasons,” he said.

The Mayor added that his office was ready to support the young boxer’s upcoming show on Saturday which is aimed at raising funds for his career.

“I formally announce Awinongya Jnr’s show which is meant to raise funds for his boxing career which comes off on September 25 and also pledge that my office will support the family to successfully hold this event”.

At age 14, Awinongya Jnr has won several gold medals at different stages of his juvenile career and is tipped for greatness in the coming future.

Awinongya Jnr remains one of the sought-after young boxers in the US following numerous national title triumphs.