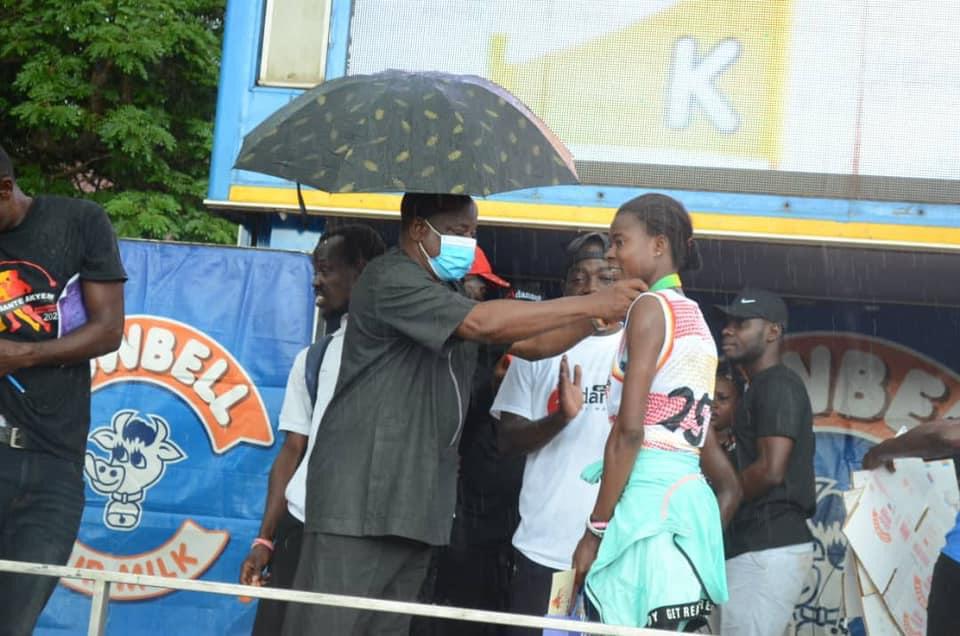 The 4th edition of the Asante Akyem Marathon Challenge held on Saturday, September 25, 2021 has successfully come to an end with William Amponsah, who won the maiden edition of the competition emerging champion for the Male’s category while Ghana’s national track athlete Sakat Lariba won the Female’s race.

The much publicized annual event which was organised by National Sports Authority (NSA) Board Chairman, Hon. Kwadwo Baah Agyemang was aimed at unearthing talents and also, to promote sports in Ghana.

The marathon event was staged at Agogo in the Ashanti Region where Director General of the National Sports Authority (NSA), Prof. Peter Twumasi graced the occasion.

Anticipation for this year’s edition was on a high following the cancellation of the 2020 edition due to the outbreak of COVID-19 and as expected, the marathon drew eye balls and attention from people all over the country.

About 380 participants (both Men & Women) registered for this year’s marathon with the Men competing in 21km while the Women/Jnr Levels also participated in 10km; all gunning for the ultimate prize.

For the Men’s category, maiden edition winner, William Amponsah who was in jersey no. 125 came to the fore once again and clocked a time of 1hr:12min.39sec to win the men’s event.

He eventually claimed the ultimate prize of GHS 5,000 for coming first and in addition, he will embark on a trip to London for winning the men’s race.

For the Women’s category, national athlete and 2015 Accra Milo Marathon winner, Sakat Lariba showed her class again in Agogo by clocking 47min.14sec to win the 10km race and claimed the top prize of GHS 2,000.

Noteworthy, Juvenile participants who placed from 1st-10th will get some educational materials and products from Cowbell.

Director General of NSA, Prof. Peter Twumasi who was in the company of Ashanti Regional Ag. Director, Mr Emmanuel Kojo Appiah and Ashanti Regional NSA PRO, Mrs Patience Sharon Adams Mensah presented the medals to the victorious athletes where he noted, such competition targeted at unraveling potentials deserves national attention, for which reason he witnessed the event.

According to Prof. Twumasi, President Nana Akufo-Addo’s vision in providing sports infrastructure across the country will aid the athletes to sharpen their natural talents which will eventually inure to the benefit of Ghana during International competition.

The NSA Boss in his closing remarks commended the organizers led by NSA Board Chairman, Hon. Kwadwo Baah Agyemang for putting together such a successful event.