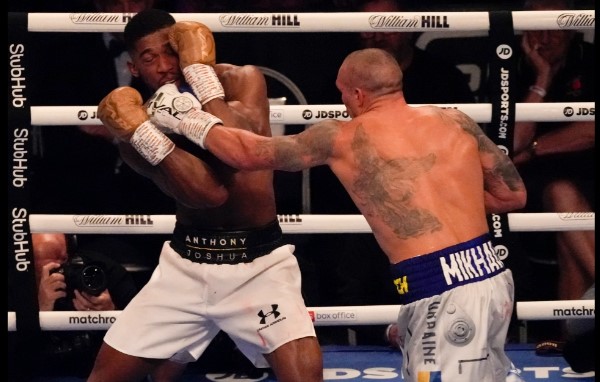 Anthony Joshua was left with a badly damaged right eye after his heavyweight defeat to classy Ukrainian Oleksandr Usyk tonight and was checked over by medics following the 12-round contest.

The challenger from Kiev continued to land heavy southpaw shots throughout the bout and AJ’s black eye started to show prominently after the 10th round.

Watford star AJ failed to make use of his 18lb weight advantage over the cruiserweight king who controlled the contest before finishing the final round strongly with a barrage of shots.

Hearn also said AJ would have a mandatory rematch and the Brit felt he already knew how he could beat Usyk next time around.

British former super-middleweight champion Carl Froch was a pundit for the fight and said the damage to AJ’s face looked significant but not serious.

Froch added he felt AJ had shown “too much respect” to Usyk whose head movement and ring craft were the key factors as Usyk claimed AJ’s heavyweight WBA, IBF and WBO belts.

Joshua ended the fight pinned to the ropes by a flurry of punches from Usyk who said afterwards he felt he could have knocked his opponent out.

The result is the latest obstacle to AJ finally facing fellow Brit Tyson Fury in a fight the boxing world have long wanted to see.

That showdown had already been derailed because the Gypsy King now has to fight American Deontay Wilder for a third time on October 9.