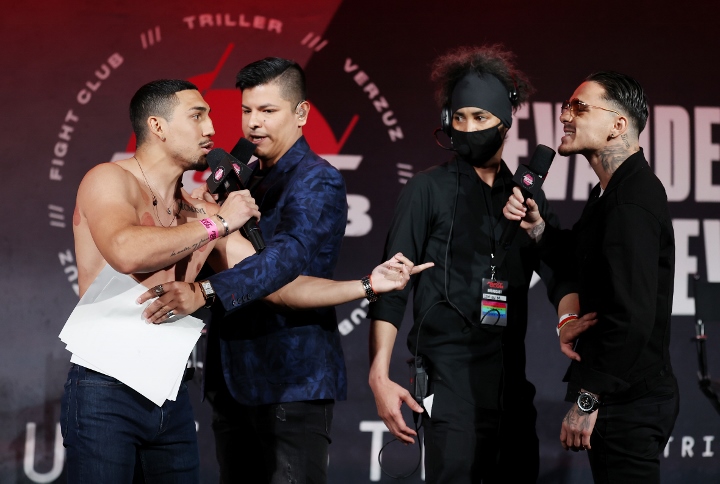 As previously reported by BoxingScene.com, Triller Fight Club has begun the process of once again moving its Pay-Per-View telecast from October 4 at Madison Square Garden in New York City to October 16 at Barclays Center in Brooklyn. The first part is complete, with MSG officials taking tickets off sale as they will longer carry the event.

“Please be advised that the Triller Fight Club Undisputed Lightweight Championship: Lopez vs. Kambosos event scheduled to take place at Hulu Theater at MSG on Monday, October 4, 2021 has been cancelled, the MSG website currently reads. “Tickets purchased with a credit card online or over the phone with Ticketmaster or directly through the Madison Square Garden Box Office will automatically be refunded to the original purchaser’s credit card account. Please note that you should expect to receive your refund in as soon as 30 days.

“If you purchased your tickets through the Madison Square Garden Box Office with any other form of payment, please call the venue’s Guest Relations Department at 212-465-6225 for more information.”

Triller Fight Club has yet to announce the new date, as the situation remains fluid. Lopez (16-0, 12KOs)—the reigning lineal/WBA/IBF/WBO lightweight champion—has already confirmed his being on board, as his father and head trainer Teofimo Lopez Sr. worked out a deal with Triller brass on his own after their side was initially reluctant to move off the October 4 date. Australia’s Kambosos (19-0, 10KOs) and his legal team have yet to respond to multiple requests from BoxingScene.com seeking confirmation of their agreeing to the 12-day delay, which will mark the sixth official fight date attached to the event.

Prior to the latest move, attorneys from both camps as well the IBF—who ordered the mandatory title fight in January—submitted official letters to Triller’s legal team insisting that the October 4 date needed to stick. In fact, the IBF imposed a final deadline of September 23 for Triller to have secured travel for Kambosos from Australia to New York.

The latest date change would put the event back on a Saturday evening, complete with musical acts and a Verzuz battle, as has become the staple of Triller’s business model since purchasing the online music platform in March.

Lopez (16-0, 12KOs) is due to make the second defense of his IBF title, as well as his first as the division’s lineal/WBA/IBF/WBO champion since outpointing Vasiliy Lomachenko (15-2, 11KOs) last October at MGM Grand Conference Center in Las Vegas. Lopez won the WBA/WBO belts and vacant lineal championship along with defending his IBF title.

The bout took place two weeks prior to Kambosos (19-0, 10KOs) becoming the official challenger to the IBF title following a twelve-round decision victory over Lee Selby last Halloween in London.

Both boxers appeared on the same show for their previous respective outings. Lopez won the IBF title in a second-round knockout of Richard Commey in the main room at MSG in December 2019. The first fight of the show saw Kambosos outlast former lightweight titlist Mickey Bey to win a ten-round decision, positioning himself to land a title eliminator with the right to challenge for the IBF belt.

Shortly after their separate wins last October, the teams for Lopez and Kambosos discussed plans for a potential spring showdown in Australia before such talks turned to a stateside fight. A deal was not reached in time for the fight to head to a purse bid hearing, where Triller Fight Club entered the equation after submitting a winning bid of $6,018,000 to claim promotional control of the title fight.

By significantly outbidding Matchroom Boxing ($3,506,000) and Lopez’s career long promoter Top Rank ($2,315,000), Triller puffed its proverbial chest in the air in claiming itself as an industry disruptor. Their only success in that regard thus far, has been disrupting their own event.

Six official fight dates have been attached to this event, beginning with plans for a June 5 PPV headliner from loanDepot Park, home to Major League Baseball’s Miami Marlins. Triller moved off the date once Showtime announced plans for a June 6 PPV topped by the exhibition between Floyd Mayweather and Logan Paul at nearby Hard Rock Stadium in Miami Gardens.

A new fight date of June 19 fell apart at the start of fight week, as it was revealed that Lopez tested positive for Covid-19 which resulted in the cancellation of a twelve-fight show accompanied by numerous musical acts. Triller irrationally declared that the event would be rescheduled for August 14, to which Lopez agreed. That date quickly transitioned to September 11 as part of another PPV event before exploring the possibility of staging the event in mid-October in Kambosos’ native Australia.

Lopez put his foot down by that point, threatening legal action over such a move and insisting he preferred the August 14 date initially announced. His legal team also argued that, as the defending champion, he should not be required to travel to Australia where he would have to quarantine for fourteen days upon arrival.

The matter was reviewed by the IBF, ultimately splitting the baby in allowing a deadline of October 17 for the fight to take place to avoid a purse bid default. However, the sanctioning body also ruled that the fight could not take place in any country where either party would be subject to pre-fight quarantine.

That led to the decision of hosting the event in New York City during the first week of October. A date of October 5 was revealed before officially moving it up one night to October 4.

Concerns were raised over the event going head-to-head with Monday Night Football, along with the consideration of moving to a larger venue to accommodate the Verzuz battle. Barclays holds more than 16,500 for boxing events, with the venue hosting 16,553 in attendance for Keith Thurman’s split decision win over Danny Garcia in their March 2017 WBA/WBC welterweight title unification clash. MSG’s Hulu Theater holds a capacity of 5,600, with the venue stuffed to the gills for an August 3 TrillerVerz event.

Once the latest change in plans is confirmed, Lopez will have his first pro appearance in his home borough. The unbeaten lightweight king—who represented Honduras in the 2016 Rio Olympics—has fought six times before in New York City, all on MSG grounds.