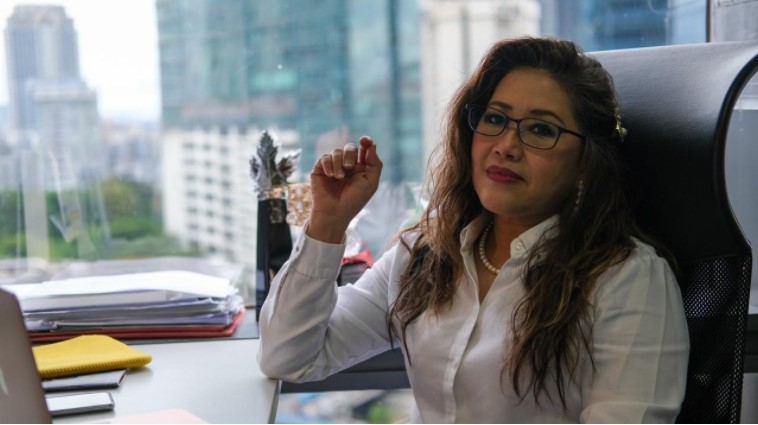 She had never been a boxer. However, she came from a sports background as a professional swimmer: Asian Games bronze medalist at 200m butterfly. As a single mother of four boys, she started an impressive boxing career from scratch, despite great odds. Meet Shelly Selowati H. Soejono from Indonesia, AIBA Board of Directors and AIBA Women’s Committee member.

Shelly’s first step into boxing was made a decade ago when she was selected among others to help with the organization of a boxing tournament in Indonesia, the President’s Cup XXI, which was taking place after a nine-year gap.

‘The minister of sports recommended me for this position, and I was interviewed and selected. We put on a great competition. My achievement was recognized by ASBC and AIBA, and they wanted me to join the Women’s commission,’ Shelly said.

However, Mrs. Soejono, despite being honored, refused: she was not part of PERTINA, the Indonesian Boxing Federation, and therefore, didn’t feel she had a home in the sport. She turned down the offer several times but was pushed by the national federation to accept it in the end.

‘One day, I relented and took on the position,’ she remembers.

In the short run, Shelly was encouraged to do the ITO courses, and she declined again in the beginning, stressing what she had been invited for a different position.

‘Nevertheless, the more I was involved, the more I liked it. The sport of boxing is very different from swimming. It challenged and interested me to learn more. Soon I passed the ITO exam and in two years I also accomplished a TD course. I became the first women technical delegate from my country’.

The boxing community began to know her more and more and they started to asked questions: ‘Who is this lady? How come she got such a position? What is she doing in our sport being a swimmer?’

‘I felt everybody be jealous. People couldn’t accept that I came from another background,’ Mrs. Soejono added.

‘Soon enough, when a new president came, I became Secretary General of PERTINA. In this position, you are required to do a lot, of course, with the approval of the president. He is a very good person, caring about boxing. I was lucky that he fully supported me. He even made me stay when I wanted to resign several times.’

Mrs. Soejono was the first women Secretary General at PERTINA over its 62 years history.

At the same time, there appeared to be some disquiet with having a woman in such an influential position in the sport, despite her obvious abilities.

‘People who opposed me, unfortunately, did so for all the wrong reasons. I stood up to the practices of competition manipulation and of course when I was appointed as competition manager for the Asian Games I couldn’t let it happen. Asian boxers deserve better and it was time for a change.’

Shelly managed to reduce competition costs from 7 billion Indonesian rupiahs to 1 billion. To prevent manipulation, Mrs. Soejono wrote a letter to the organizing committee of the Asian Games, INASGOC, where she explained the schemes.

Sadly, many people around didn’t think about boxing’s best interests at that time. They just wanted to make money on it. If you don’t get rid of such people, you would never build good governance and transparency. We must not be afraid to identify these things, to be transparent with others and to take the right action.’

‘When I became Secretary General, I managed to develop 22 R&Js and coaches to receive the AIBA 1,2, 3 stars, and 11 of them were women,’ Mrs. Soejono mentioned. ‘I know women’s frustration being surrounded mostly by men in this sports. Lots of women in various countries have difficulties – they face the same what I faced on my way to where I am now. Boxing was a man’s territory. However, we women can achieve a lot.’

She admits it was a long and tough path to the top.

‘It was challenging, as I am not a boxer. I do my boxing as fitness several times per week and even that is difficult. However, if you are quite some time in and love the sport, you can learn it all. Our goal is to inspire women to not be afraid and do not hesitate. Despite the struggle we are facing, yes, we can do it. As long as we have our own integrity.’

Shelly called for solidarity among women. ‘We should support each other, this way we can achieve more. I personally like to see women succeed.’

She also mentioned the positive changes AIBA is going through and is working to shape even more of them.

‘Boxing is our President Umar Kremlev’s life. I was not wrong electing him as a President. He did a lot of good changes for our sport, sacrificing his time, and he can give even more.’

‘Everything comes from the top. When the leader is strong in actions, the rest will follow.’

Not only was it challenging to become an AIBA Board of Directors member, but also to be a single mom.

‘I went through a tough life but God was always there for me. Time management and prioritizing were keys to success. Discipline is also important, and first of all, we need to show children how we do ourselves. They will follow.’