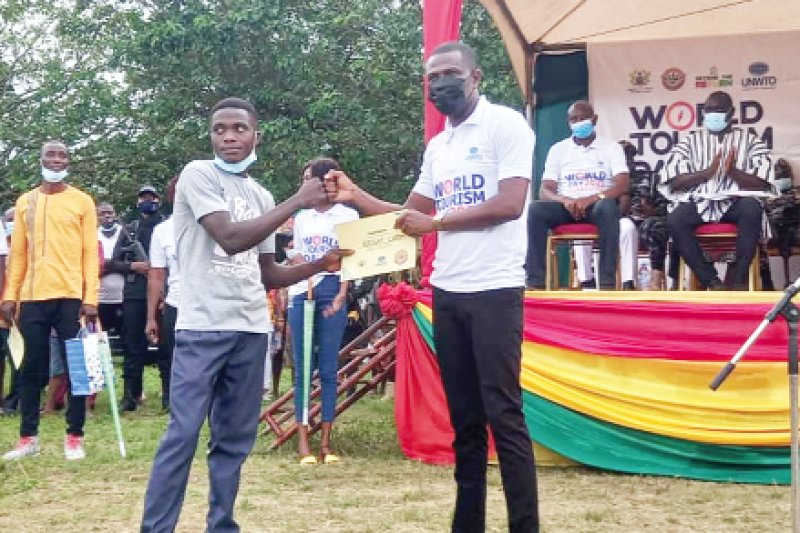 Master Bright Lartey, a 17-year-old form one student of the Liati Wote E.P. Junior High School has won the “Afadjato Hiking Challenge” with a record duration of 25 minutes.

The Challenge was part of activities which marked the 2021 United Nations World Tourism Organisation (UNWTO) Tourism Day celebration in Wli in the Volta Region.
Master Lartey finished the challenge first, out of 65 competitors including a lady.

He is the fifth of seven children and likes reading as a hobby and eats any available food as his favourite.

Master Lartey in an interview with the GNA Entertainment, said he wanted to become a mechanical engineer in future and aimed to achieve the dream.

Running and playing football are his favourite sports.

He said he began climbing the Afadjato since he was young, an inspiration he took from his father.

“I climb the mountain four times in a week,” he said.

The winner said his father also hiked and always win in any hiking event organised in the community.

He said his family was happy and congratulated him for making them proud.

Master Lartey expressed gratitude to the Ministry of Tourism, Arts and Culture, Ghana Tourism Authority and all stakeholders for such an event.

He wanted the event to become an annual event to unearth more talents in the area.

Other winners include Mr. Francis Komla Mortey as 1st Runner Up, who received GH¢ 1,000 and a certificate.

Mr. Frederick Annie, 2nd Runner Up, finished the challenge in 45 minutes and got a certificate and cash prize of GH¢ 700.

Madam Yesutor Tengey, the only female who competed also received a prize.

She said it was her first time to conquer the mountain and was appreciative for being recognised.

The fourth to tenth positioned participants were presented with certificates.