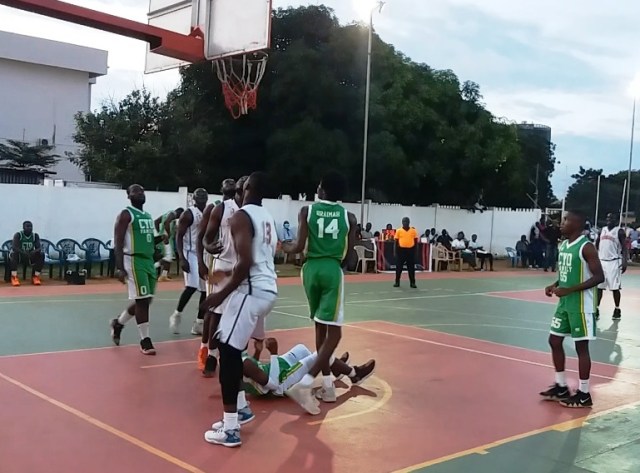 Braves showed off its vast experience, chemistry and overall quality to clinch the win over the solid CYO side earlier today at the Prisons Court in Accra.

The 40 point win represents another statement indicating Braves readiness to successfully defend its title; the 2020 season was lost due to the COVID 19 pandemic.

Braves went on an 8-0 run to start the game; Patrick Dzogbetsi, Hasheem Braimah and Daniel Nii Aryee scored in the run. CYO Yusha Iddi drained a three pointer to end the run. Daniel Ayana scored four straight points and Desmond Coblah scored a layup after gathering the rebound off his initial miss.

CYO Guard Prince Adu-Gyamfi scored five points including a three pointer with Sebastine Segbefia and Iddi adding two points apiece. Their efforts were bettered by Braves Coblah who scored six points and Zamon Alhassan who scored four points to give Braves a 32-17 half time lead.

Rauf Zakari finally broke CYO’s scoring duck off a neat passing sequence but Abbey responded by blowing by his defender to slam the ball home. Alhassan scored all three free throws after getting fouled on a three point shot attempt. Jefferson scored for CYO and Coblah scored the final shot in the third quarter.

Coblah continued from where he left off by scoring after a give and go with Abbey in the opening possession for Braves. Alhassan scored a pair of three pointers. Adalbert Allotey scored a tough turnaround jumper and dunked off a feed inside the paint from Zakari. Adu-Gyamfi scored two three pointers in a good run for CYO. Braves emptied its bench to see out the game.