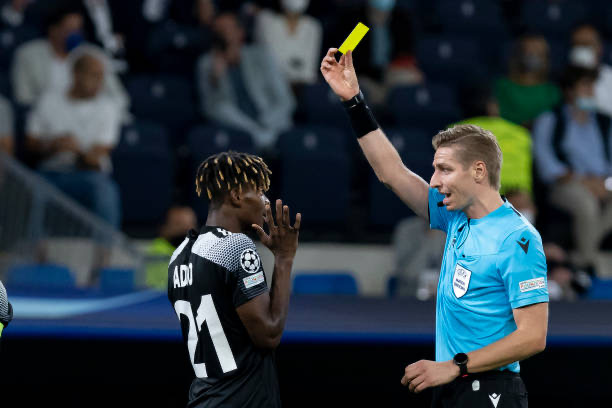 Ghanaian midfielder Edmund Addo who played the entire duration when Sheriff Tiraspol shocked Real Madrid 2-1 in the Uefa Champions League at the Bernabeu Stadium in Spain on Tuesday believes it is possible to sign for Manchester United in future.

The 22-year-old came to light earlier this year when he joined Sheriff Tiraspol from Slovakia club FC Senica.

He has since been in an awesome form and was even able to ‘pocket’ legendary midfielders Toni Kroos and Casmeiro when Sheriff stunned the world by defeating Real Madrid in Spain.

Although, reports suggest that a lot of top European clubs have shown interest in his style of play and could make advancement to sign him in the January transfer window, Addo is hoping Manchester United are among those who will officially come forward since it has been his childhood dream.

“Ideally, my dream is to play for Manchester United in future,” Addo said in an interview.

“Which player doesn’t want to be in one of the strongest football clubs in Europe?  I am no exception.”

“What player doesnt want to be in one of the strongest football clubs in Europe? I’m not an exception. Ideally, my dream is to play for Manchester United

“Since childhood I have been rooting for the Red Devils. But today you have to work hard.

“I strive to get a chance to prove myself in the Champions League. Now this is the most important thing,” he added.

Addo had 92.3% passing accuracy with 25 touches  and four ground duels won against Madrid.

Also, he had 2/2 long balls completed and won two fouls and tackles as well as interpretations.

Interestingly, despite Addo’s consistent performance in Europe, he was conspicuously missing when Ghana’s new coach Milovan Rajevac named the Black Stars squad that will play the double header in 2022 FIFA World Cup qualifiers against Zimbabwe on October 5 and October 9.

However, reports have suggested that due to the injury sustained by Alfred Duncan, Addo could be handed a late call up and may have the opportunity to make his debut for Ghana.