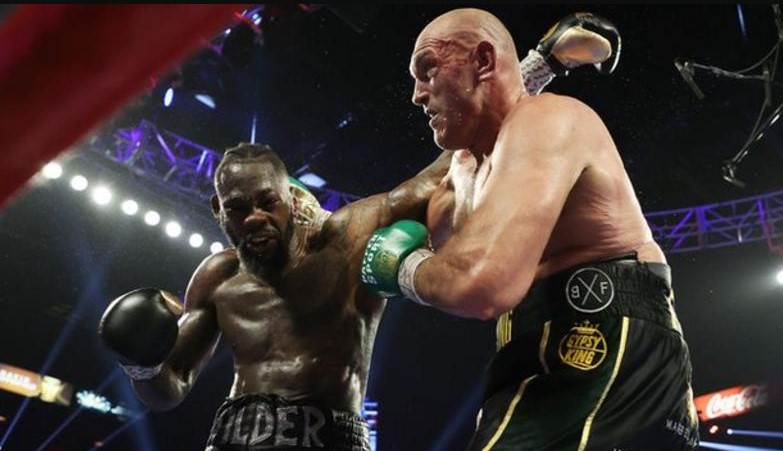 Deontay Wilder is an “atomic bomb” of a fighter and the “most dangerous heavyweight out there” says Tyson Fury as he prepares for their trilogy fight.

American Wilder was knocked out by WBC champion Fury in February 2020 after their first contest ended in a draw.

“A lot of people are writing Wilder off in this fight,” said 33-year old Fury before Saturday’s Las Vegas bout.

“They almost look at him like he’s a bum. Like he can’t fight and he’s useless. You can’t write him off.”

The defeat by Fury is Wilder’s sole loss on his professional record and the Briton, who goes into the fight as the clear favourite, is aiming to extend his undefeated streak to 32 fights.

“Make no mistake about this, Deontay Wilder is the most dangerous heavyweight out there,” added Fury. “Combine them all together and they don’t make a danger like Wilder.

“So that’s what I’m messing with. I’m playing with an atomic bomb, messing round, clipping wires.

“Every time you go into the ring with Deontay Wilder you’re playing with that danger.

“This is the third time now I’ve been in the ring with him and every single time he’s been very dangerous. He’s a very dangerous hombre with big, big power and he can close the distance quickly.

“With most boxers they need to hit you with five punches, with Wilder he can hit you with a quarter punch and knock you spark out.”

Wilder, 35, is not expected to radically alter his game plan when they meet at approximately 04:00 BST on Sunday, but Fury insisted the American is “tailor-made” as his most dangerous opponent.

“Klitschko would be the first danger, no one compared to him. And then the second danger would be Wilder in my second career. That’s what we’re messing with – my ultimate danger man.

“If you could design any fighter to be able to compete with me as a boxer then it would be Deontay Wilder. He’s the most dangerous out of all of them.

“The rest of them are all tailor-made for me. They’re not dangerous, they’re just boxers.”

The trilogy fight was originally scheduled to take place in Las Vegas on 24 July but was postponed after Fury tested positive for coronavirus.