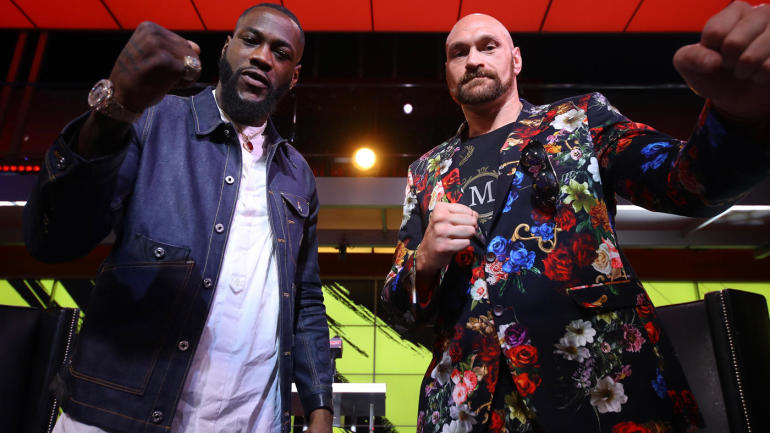 With the heavyweight division already turned upside down thanks to unified champion Anthony Joshua’s upset loss to Oleksandr Usyk two weeks back, it’s difficult to know exactly what to expect from Saturday’s trilogy bout between Tyson Fury and Deontay Wilder.

Fury (30-0-1, 21 KOs) will defend his WBC and lineal titles some 20 months since the last time he entered the ring when he battered Wilder (42-2-1, 41 KOs) to the tune of a seventh-round TKO in their rematch. The first meeting between the two fighters ended in a disputed split draw in 2018 after Fury, who largely outboxed Wilder, survived two knockdowns.

Everything from the gap in time between the second and third fights to the fact that Fury originally thought he was fighting Joshua this summer for the undisputed title until Wilder forced a court injunction plays into the unpredictability of this fight inside T-Mobile Arena in Las Vegas. So does Wilder’s other worldly punching power, which has long covered a magnitude of sins.

With that in mind, let’s take a closer look at the biggest storylines entering this weekend.

1. Wilder has said and done all the right things of late

It’s fair to say that neither Wilder nor Fury could’ve predicted the past two years to play out exactly how it did. As soon as Fury finished Wilder in in February 2020, most expected a third fight within the next five to six months, as per the details of the contract signed by both, which gave rematch rights to the loser. Then the pandemic broke out and Wilder’s team, according to Fury and co-promoter Bob Arum of Top Rank, missed the deadlines to secure a third fight. While it took a judge to make sure we see this third meeting instead of an undisputed title bout, the delay offered Wilder an opportunity to try and fix everything from what went wrong in the second fight to his raw and barbaric style. And to his credit, Wilder has spent most of the layoff laying low after initially soiling his name with one excuse after another for why he tasted his first defeat, not to mention a few conspiracy theories thrown in to further deflect the blame. A change was certainly needed and Wilder did as much by parting ways with assistant trainer Mark Breland and naming former opponent Malik Scott as his new chief of staff. Incumbent trainer Jay Deas is still there, as is well-known boxing trainer and UFC cut man Don House, who joined the team after previously leading Bermane Stiverne to the same WBC title Wilder took from him in 2015. Wilder also brought in world-class sparring from the likes of 6-foot-7 slugger Robert Helenius, who will face Adam Kownacki in a rematch on Saturday’s undercard.

Part of the reason why Fury’s victory over Wladimir Klistchko in 2015 to claim a trio of heavyweight titles was such a shocking upset was because the 6-foot-9 boxer had been so inconsistent in the years leading up to it. Often ballooning in weight, Fury became known as a fighter who played up and down to the level of competition in front of him (while doing the same in regards to the work put in during training camp). Even though Fury deserves all the credit he received for making such a dramatic comeback in 2018 from drug abuse, weight gain and depression, his fights not involving Wilder have seen equal amounts of highs and lows in this regard. Given how open Fury has been about his continuing mental health challenges and the demons of his previous substance abuse, it’s a wonder as to whether he will be as dialed in for this third fight against Wilder when there isn’t as much at stake. Fury expected to have already fought Joshua right now in the first of a two-fight series. Instead, he must fight the division’s most dangerous fighter a third time in three years for nothing more than to fulfill a contractual obligation. The proof will be in the pudding on fight night as to whether the “Gypsy King” put in the required level of work to play matador once more.

3. Make no mistake: Wilder is coming for blood

Unlike the second fight, which saw Wilder blame everyone and everything but himself, this time there will be no excuses. And say what you will for his technical skill up to this point, the 6-foot-7 slugger can only go up from what we have seen after nearly two years spent working exclusively on revenge. What it created was an even nastier streak inside Wilder that has come out in the rare times he has come up for air to conduct interviews. A bizarre press conference in June to announce the fight, which saw Wilder don headphones and largely refuse to answer questions, only added to the idea that he is operating at a level of intensity that is nothing short of frightening. It’s clear Wilder is not just looking to avenge the loss to Fury but also wants to make him pay for the multiple accusations Wilder made against him for cheating. If training camp videos of Wilder pounding Scott to the body are any indication, it appears he’s ready to go down swinging, if necessary. For most fighters, that would scream desperation. But seeing a puncher as destructive as Wilder go anywhere near desperation is about the scariest thing an opponent can dream of.

4. No matter the result, expect nothing but drama

The good news for fans entering this fight is that should any of the three most likely scenarios play out, one can expect those who purchase the pay-per-view to get their money’s worth. Should Fury choose to box Wilder like he did in 2018, there will be no shortage of drama watching him walk the tightrope. The same could be said for Fury repeating his performance in the rematch by bringing the fight to Wilder, which he has claimed publicly he will after adding 20 pounds of bulk ahead of the trilogy. But what about a third option? What about if Wilder eschews his typical strategy of countering on the outside and waiting for the perfect moment to deliver a fight-ending shot? And what if the result is both fighters, from the opening bell, going for the knockout? That right there has instant classic written all over it. While an all-out brawl would be difficult to guarantee, there’s plenty of reason to believe Wilder will be much more aggressive than he was in their first two meetings.

5. A thrilling fight would be a shot in the arm for boxing

Although the sport of mixed martial arts, fueled by the maverick Dana White as UFC president, seemed to thrive despite the pandemic in 2020, boxing had a much harder time putting on big fights without the guarantee of a live gate revenue to afford it. Although 2021 has seen crowds return, most of the big-name fights have been overshadowed by events featuring the Paul brothers of YouTube fame or a 58-year-old Evander Holyfield. Not only could the sport use the injection of a big fight that actually lives up to its expectations, the timing couldn’t be any better to build off the momentum of Usyk dethroning Joshua. The heavyweight division has long been the gateway drug for casual and mainstream fans to come back and get a taste of the sweet science and it could do a lot worse above the marquee than having two larger-than-life characters with history facing off in a grudge match. The only thing better for the sport than a great fight might be an upset win for Wilder, which could likely extend the rivalry to a fourth fight.