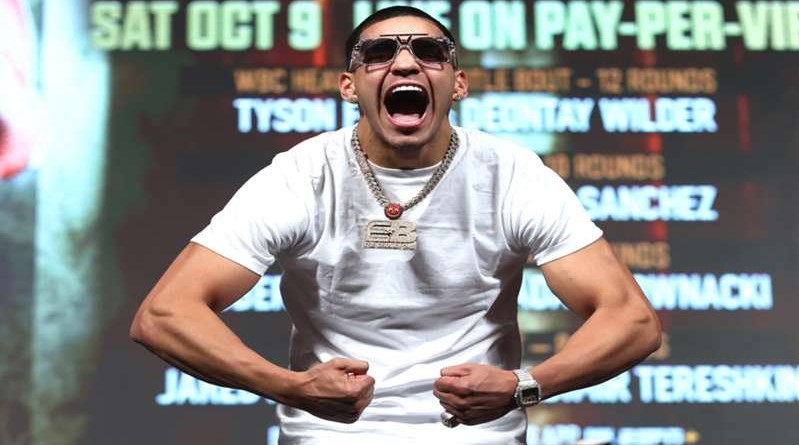 The super middleweight division is loaded with talent and has become one of the more talent-rich weight classes in boxing. At the top of the heap is DAZN Boxing’s No. 1 pound-for-pound fighter and three-belt 168-pound Canelo Alvarez. He’s followed by IBF titlist Caleb Plant, former titleholders David Benavidez and Billy Joe Saunders, and former middleweight champ Daniel Jacobs. But there’s a guy quickly rising through the ranks who is ready to leave his mark.

Edgar Berlanga returns to action on Saturday on the undercard of Tyson Fury vs. Deontay Wilder 3, taking on former world title challenger Marcelo Esteban Coceres. The 24-year-old has plowed through the competition thus far, being undefeated in 17 fights, with 16 of those coming by way of knockout. However, his KO streak was snapped in his last time out when he went to an eight-round decision against Demond Nicholson.

Berlanga feels the sky is the limit to how far he can go when it comes to his future. He’s got his eyes set on the biggest shark of them all in Alvarez, who faces Plant on Nov. 6 to determine the first-ever four-belt undisputed super middleweight champion. While he doesn’t directly predict who wins the fight, Berlanga’s focus is squarely on a potential showdown with Alvarez.

“Tremendous fight. Beautiful fight. It’s good for the culture. Good for the 168-pound division,” Berlanga told DAZN News after Thursday’s undercard press conference. “This is to unify the division. Somebody is going to take all the belts. Eventually, they are going to have to give me one of them.

“Me and him, we’re going to do tremendous numbers. He takes all the belts (against Plant), he’s going to have to give me one.”

Before a Canelo-Berlanga fight can occur or even be discussed, the latter has to take care of business first with Coceres and then against an unnamed opponent on Dec. 11 at Madison Square Garden. Coceres gave then-WBO champion Saunders a run for his money before getting stopped in the 11th round in November 2019. Berlanga plans on getting Coceres out of there quicker than Saunders and putting the division on notice on one of the biggest events of the year.

“I’m making a statement definitely Saturday night,” Berlanga said. “I’m here to showcase my talent, take his head off. I’m going to punch his head back to Argentina. That’s what we’re doing.

“Get your popcorn ready.”