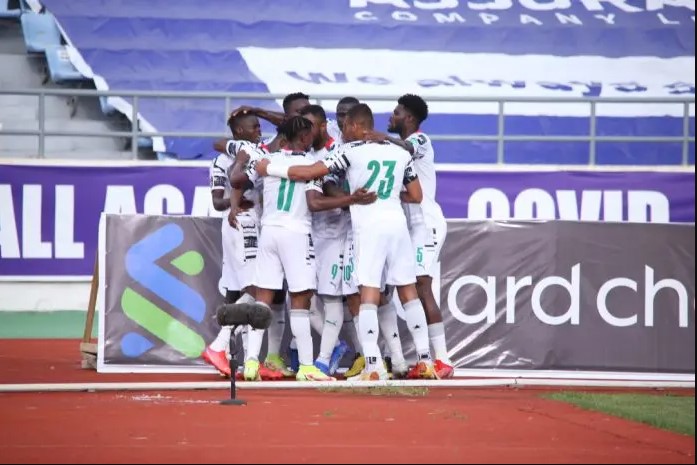 Andre Ayew walked off the pitch after the 90th minute mark knowing he had left his heart there and registered another goal for Ghana. But how many times have we seen this? A fairly good game from the man for Ghana where he caps it off with a goal.

Baba Rahman’s cross was perfectly weighted beyond a taller Benjamin Tetteh but it found Andre’s head. He celebrated in usual faction – bringing in the fans and making sure that they all got in on the act.

Milo’s first game back ended in success – big success. There were signs of a team that wanted to play.

The Black Stars started the game well. Five minutes in, they had scored from the boot of Ajax star, Kudus Mohammed after a brilliant layoff from Jordan Ayew.

Ghana’s left side was the livewire. Kamaldeen Sulemana kept on knocking on the door. He touched and moved well. His general movement was impressive – linking up with Kudus to provide some bright chances for the team.

Before the game though, there was a major clamour for Fatau Issahaku, Kudus Mohammed and Kamaldeen Sulemana and they all made good accounts of themselves in the game. Much of the athleticism on the left side resulted in a goal in the 42nd minute that was disallowed because the Rennes star had picked up the ball in an offside position.

Milo will heave a sigh of relief. His first match back and for all the criticism of him being a very defensive coach, comes in to win by that margin. In his first game in his first stint as coach of the Black Stars he played Tanzania where he drew 1-1.

So this performance on a first match basis is a marked improvement on the one in 2010. He made some good substitutions. First he took off Fatau Issahaku and brought on Baba Iddrissu to keep the shape of the team after Ghana had gone down moments in the second half, Jordan walked off to welcome Benjamin Tetteh. Milo will have questions to ask his defense though. Particularly, for the penalty that led to the Warriors’ equalizer.

In the 46th minute, Alexander Djiku was caught out of position again and had to make a late tackle to stifle a Zimbabwean foray. In doing so, he brought down Knox Mutizwa. Musona’s penalty was too expertly taken for young, fresh goalkeeper Jojo Wollacot to do anything about.

If Ghana will have a place at the World Cup next year or win the AFCON in January, a lot of it will hinge on Thomas Partey. He took his goal expertly, taking down two defenders before slotting it past Washington Arubi’s post.

The Black Stars as much as Milo needed this result but the real test will lie in Harare when the Black Stars play the Warriors again on the 12th. For large parts of the first half and the second half when the warriors poured forward they showed promise. Milo may have won but that should leave him scratching his head a bit. Musona was lively, Perfect Chikwende played a good game and Marvelous Nakamba showed glimpses of why he is trusted in that Aston Villa midfield alongside Jon McGinn.

All of it could come to bare in the return leg. Rajevac will have to find ways to close out the Warriors. Home advantage will always count for something given that they know they have the slightest chance of qualification if they can win on Tuesday.

This is the liveliest the Black Stars have looked in a while and if they can keep up the momentum, it should be a happy ending when the final whistle goes in Harare.