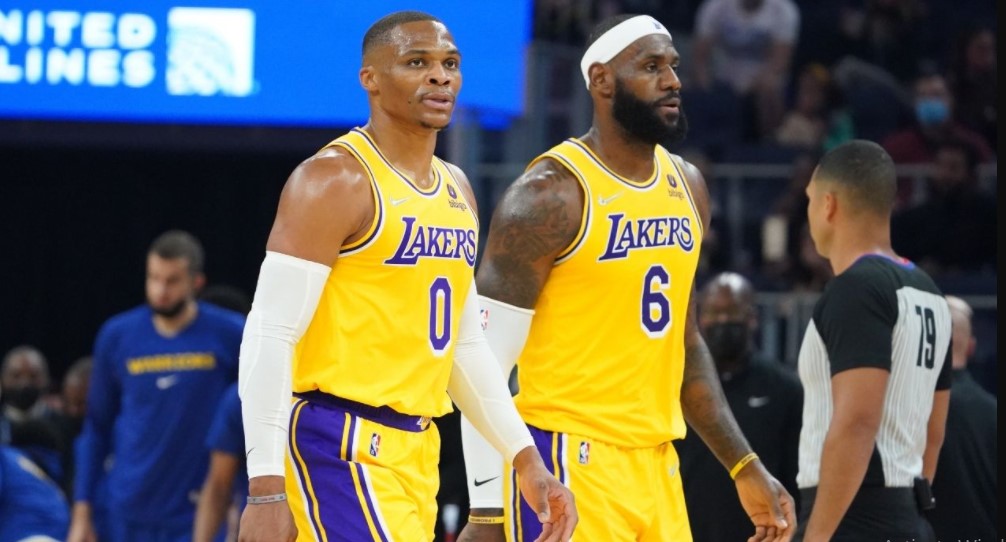 There was a big game Friday night in San Francisco between a beloved Bay Area team and its rival. And that game was between the Giants and Dodgers.

But just because the Lakers’ exhibition game with the Golden State Warriors was the least important sporting event in town, it didn’t mean nothing of note happened.

For the first time as Lakers teammates, LeBron James and Russell Westbrook took the court, another sure sign that the run toward meaningful basketball was speeding up.

As predicted, the bumps in that road were unavoidable, the two NBA stars trying to find the best way to play alongside each other. And even when James went to the bench, Westbrook was rusty, missing passes and having the ball slip off his fingers.

In his first action of the preseason, Westbrook committed six turnovers and had two points in the Lakers’ 121-114 loss to the Warriors. But nothing that happened should dissuade coach Frank Vogel of the belief that Westbrook can give the Lakers a dimension they lacked a year ago. He had seven rebounds and four assists.

“Russell’s a great player. We’re really excited about what those two look like together,” Vogel said of James and Anthony Davis, “but honestly having a third player of a star caliber like Russell is definitely going to help us either in the minutes when LeBron is out, or help us withstand potential injuries like we had last year when we struggled. But it really just comes down to when you have a chance to get a great player like Russell Westbrook, you go for it.”

Even with Westbrook and James on the court, it wasn’t a real look at what the Lakers will be working with. Davis didn’t play for the first time because of rest. And then there’s Trevor Ariza’s situation, the veteran wing unavailable for at least the next eight weeks after undergoing ankle surgery Wednesday.

“Trevor did everything he could to see if he could get through the injury without missing any time, without any procedures,” Vogel said. “So, ultimately it came down to just making sure that we got it cleaned up.”

The Lakers are tinkering with lineups, starting Kent Bazemore, DeAndre Jordan and Malik Monk with Westbrook and James, who had nine points and three rebounds.