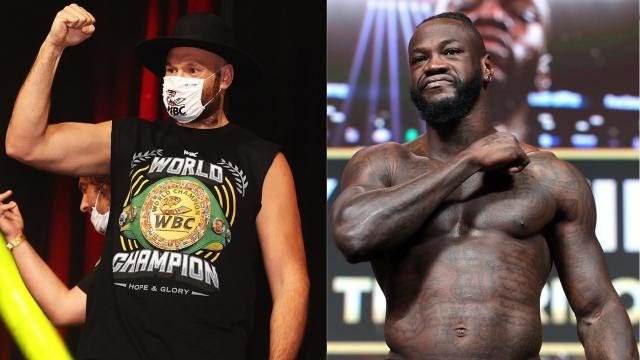 Tyson Fury will boast a near 40lb weight advantage over Deontay Wilder in their third heavyweight fight at Las Vegas on Saturday night.

Both competitors came in at the heaviest weights of their professional careers, with Fury tipping the scales at 19st 11lb and Wilder coming in at 17st.

Fury is making the first defence of the WBC title he won when he dethroned Wilder as champion in February last year – both combatants’ last fight.

The standard practice after a weigh-in is for a head-to-head staredown between the fighters but it was confirmed that would not occur here, with Fury’s co-promoter Bob Arum telling BBC Sport: “They are not animals, they are sportsmen. I think they are unnecessary, it dehumanises the fighters and I don’t think it’s good for the sport.”

The fighters, who had a tetchy slanging match at the final press conference earlier in the week, taunted one another from across the stage.

Wilder said: “Calmness is the key to the storm. I know that when I’m not calm, my mind is cloudy and you make bad decisions. But when you’re calm you can weather the storm, you’re able to make great decisions.

“We have rejuvenated myself, reinvented myself, redemption is upon us and I can’t wait to show the world what I’m all about. I’m reintroducing myself to the world as Deontay Wilder.”

When asked what it means for him to be this heavy, a fired-up Fury said: “It means total obliteration of a dosser. Total annihilation. I’m going to put him in the Royal Infirmary after this fight, don’t worry about that.”

Wilder has employed Malik Scott as his cornerman for this fight. Scott is a former heavyweight who won 38 of his 42 fights although never challenged for a world title and was knocked out by Wilder when they met in 2014.