We have a fight: Tyson Fury and Deontay Wilder both weigh in at heaviest of their careers 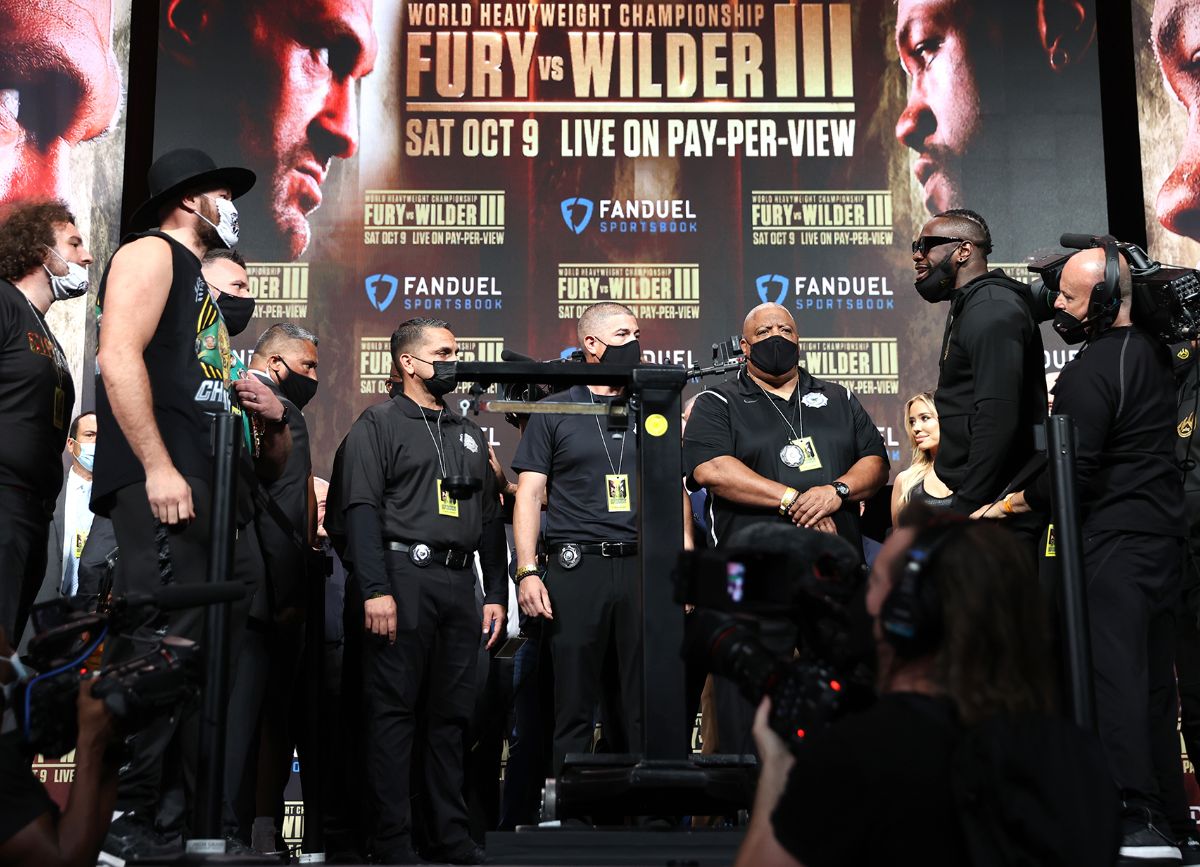 Tyson Fury and Deontay Wilder faced off one final time ahead of their third heavyweight championship showdown in 34 months when they came together at Friday afternoon’s weigh-ins at the MGM Grand Garden Arena.

Wilder, who emerged first in a black tracksuit before stripping down to his shorts, was first on the scales and came in at a career-high 238lb. Fury, who entered wearing a black undertaker’s hat with a sleeveless black T-shirt, tipped the scales at 277lb, also the heaviest weight of his career.

Deontay Wilder on the scales

Before Fury had even descended from the scale, both fighters were pointing and barking at one another from a distance for several minutes before briefly coming together for a traditional staredown that was quickly aborted due to flaring tempers on both sides.

Weigh-ins ahead of heavyweight fights are almost entirely ceremonial affairs since it is the only weight class where fighters aren’t bound to meet a contracted pound limit. But Friday’s proceedings were of particular interest given the extent to which each man’s weight affected their performances in their previous two meetings.

“The weight just came on, I wanted to look sexy and feel sexy,” Wilder said. “I taste sexy as well. I’m bench pressing a little over 350, so there won’t be no rushing me and putting his weight on me and things like that.”

For their first encounter back in December 2018, which ended in a split draw, Wilder came in at 212½lb, or 44lb less than Fury’s 256½lb. For the rematch, Wilder came in at a career-high 231lb and Fury tipped the scales at 273lb, claiming he’d been eating six meals and drinking eight litres of water daily in search of a size advantage against the lighter American. The tactic paid off as Fury spent most of the night coming forward and physically bossing around Wilder, who appeared slower than in their first fight as if compromised by the extra ballast.

The 39lb weight difference between the pair for Saturday night’s main event – which makes only the fifth trilogy between heavyweight champions in boxing history after Patterson-Johansson, Ali-Frazier, Ali-Norton and Bowe-Holyfield – will be the smallest of their three fights.

Fury cut the type of pro wrestling promo that would not feel out of place on WrestleMania when asked to comment on the weights: “It means total obliteration of a dosser! Total annihilation, that’s what it means to me.”

Asked on whether he believed Wilder’s new trainer Malik Scott would make a difference in the fight at the T-Mobile Arena, Fury was to the point.

“Nothing,” the champion said in full throat. “It’s one shithouse teaching another shithouse how to fight. Both a pack of losers, and they both ain’t worth a sausage.

“He couldn’t teach him anything. Man couldn’t fight himself, he was a shithouse. So when you’ve got a shithouse teaching another shithouse how to fight, you’re in for a real pack of shithouse cowards.”