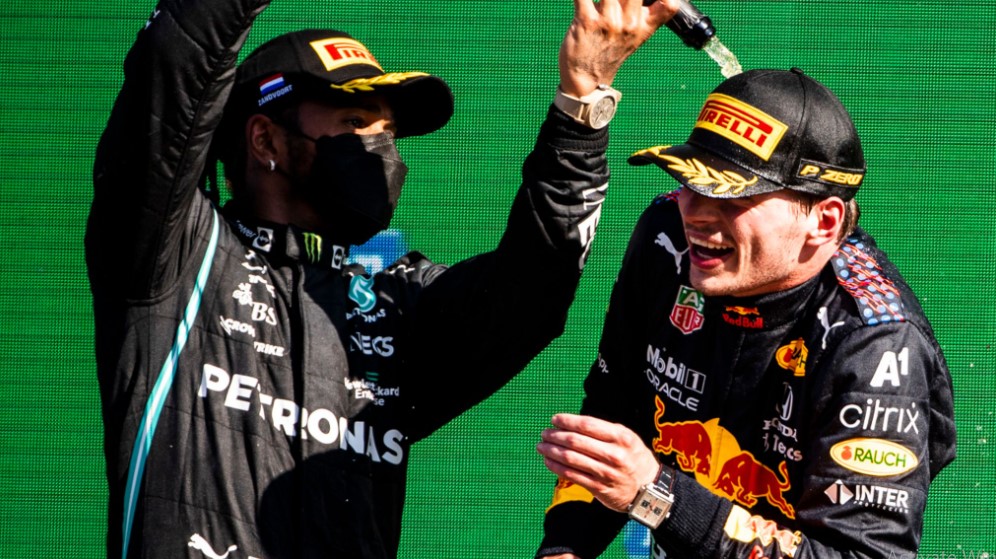 Bottas led almost every lap of a gripping race in difficult conditions and sealed his first win of the season with an overtake on Charles Leclerc, before finishing comfortably ahead of Verstappen at the chequered flag.

“From my side, it was one of the best races I’ve had, ever,” said Bottas.

But Verstappen has still retaken the championship lead from Hamilton, who was running third after starting 11th before being brought into the pits with just eight laps remaining – a decision he slammed on team radio.

“Why did we give up that place?,” said Hamilton, having previously refused Mercedes pit calls as he tried to get to the end of the race on the same intermediate tyres he started on. “We shouldn’t have come in, man. I told you!”

Mercedes told Hamilton that he would have lost even more positions by not stopping – but the end result is that Verstappen now heads the standings by six points with six races remaining in an epic 2021 season.

Leclerc was also attempting to complete all 58 laps on the same tyres before he was passed by Bottas. He then pitted, and was overtaken by Perez in the other Red Bull for the final podium position.

Perez had an incredible battle with Hamilton for fourth earlier in the race, even being forced over the pit-entry as they went wheel-to-wheel in the final sector before he lunged to maintain position into Turn 1.

Pierre Gasly finished sixth for AlphaTauri despite picking up a five-second penalty for a first-corner collision with Fernando Alonso, although the Driver of the Day was Carlos Sainz after a magnificent comeback charge.

Esteban Ocon was the only driver to finish the race on just one set of intermediate tyres, although he struggled towards the end of the race. But he didn’t struggle on tyres as much as Sebastian Vettel, who at one point bizarrely fitted the medium tyres on his Aston Martin, barely making his way around the track before returning to the wets.

Hamilton limits Verstappen damage – but could it have been better?

It hasn’t been an easy 2021 season for Bottas, without a win through the first 15 races while also learning that he would be replaced by Mercedes at the end of the year. But the Finnish driver put all that behind him with what was an accomplished and pretty much faultless display in conditions he occasionally suffers in.

Bottas, who assumed pole position thanks to Hamilton’s grid penalty, safely navigated the first corner thanks to a brilliant start and then slowly but surely stretched his lead from Verstappen. He was faced with another big test as Leclerc looked to commit to stay out on his worn tyres, but stormed past the Ferrari on Lap 47 to force him into a stop a lap later.

Verstappen, too, can be happy with his drive. While it didn’t feature his usual heroics in the wet weather, it was impressive given Red Bull just had nowhere near the pace of Mercedes at Istanbul Park.

The major talking point at the end of the race, however, was certainly provided by Hamilton and Mercedes.

It had been a mighty recovery from Hamilton after starting 11th, making up a place on the first lap before passing Vettel, Yuki Tsunoda, Lance Stroll, Lando Norris and Gasly rather comfortably.

He was next faced with Perez and lost out this time around, although assumed what was a podium position when the Red Bull stopped. However, Mercedes were soon calling Hamilton in.

“Why?” Hamilton asked. “The new inter is the way to go,” came the reply. But Hamilton insisted: “I don’t think it is. It feels like we should stay out.”

Hamilton finally listened to instructions on Lap 51 but perhaps didn’t realise how many positions he would lose – two – in the process. “**** man why’d you give up that space?” raged Hamilton. “We shouldn’t have come in. Massive graining. I told you.”

After the race, Mercedes boss Toto Wolff backed his crew’s strategy and said Hamilton may not have even made it to the end of the Turkish GP on his tyres. Hamilton also seemed to have calmed down a touch.

While he maintained that his tyres could have gone to the end of the race, he said: “The tyres are bald so you don’t know how far they’re going to go, and there’s definitely the worry of the life of the tyre.

“I think probably in hindsight I should either have stayed out, or come in much earlier. A bit frustrating, but it is what it is.”

When’s the next F1 race?

An incredible season and title run-in continues at the United States GP as F1 heads Stateside for the first time since 2019. Every session from Austin’s Circuit of the Americas is live on Sky Sports F1 on October 22-24.