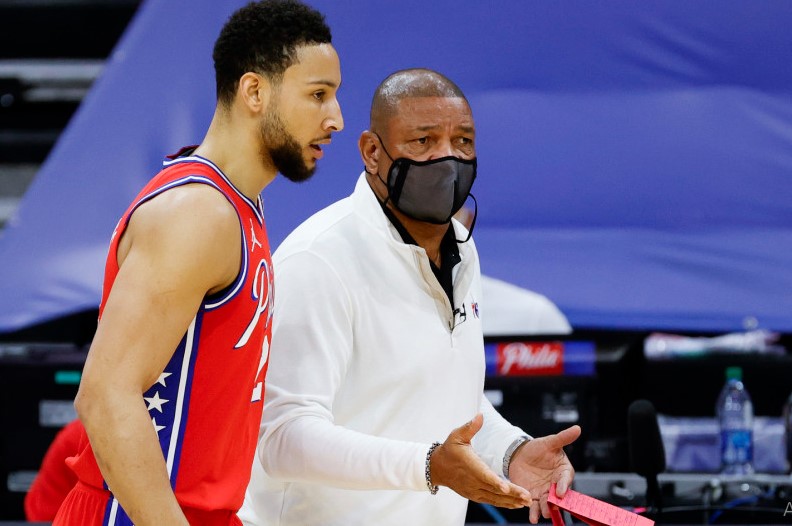 The Sixers’ relationship with Ben Simmons turned particularly icy this summer as the DPOY runner-up froze out his teammates and the organization in search of a trade.

One of the most pivotal parts of the summer saga was a reported meeting in Los Angeles between Simmons’ camp and the Sixers’ front office, in which Simmons said he intended to never play for the Sixers again. It was definitely a point of no return, and a meeting that sounded like it could’ve been contentious.

And a new report from Bleacher Report’s Jake Fischer confirms those suspicions.

Fischer, an NBA insider with sources in many front offices around the league, wrote in a new story Wednesday some specific details from that L.A. meeting, including a spicy moment from Sixers head coach Doc Rivers:

“Dating back to those Combine dialogues, Philadelphia was adamant in its plans to withhold Simmons’ pay for not complying with the terms of the five-year, $170-plus million agreement he signed in July 2019. Later, at Paul’s home, Rivers even shouted, “It’s in your f–king contract” to report and play for Philadelphia, sources told B/R.”

He’s not wrong: everything the Sixers are doing right now is being enforced through the wording of his contract, and if Simmons or his representation were surprised by his Oct. 1 money heading into escrow or the fines stacking up for not reporting, that means they weren’t doing their jobs.

There’s also a larger logic at work: You don’t show up to work, you don’t get paid. Pretty simple.

Apparently the contentious moment between Rivers and Simmons is emblematic of a relationship that never really developed last season during the coach’s first year in Philadelphia.

Fischer reports that sources told him the two never gelled:

“By all accounts, the head coach, a former point guard, has never managed to build a strong rapport with Simmons. Perhaps that’s due to the additional demands coaches typically place on their nominal floor generals, or it may simply be a case of two differing personalities in a competitive industry failing to mesh.”

This is at least a little interesting, considering Rivers repeatedly defended Simmons last season as the All-Star’s iffy offensive game was questioned by reporters. It seemed Rivers was perfectly fine with the way Simmons was playing, at least publicly.

But Rivers is also a no-nonsense guy, and Simmons can carry a fair amount of nonsense with him.

In any case, Simmons is back in Philadelphia and seems inexplicably ticketed for a reunion with the team, potentially practicing and maybe even playing actual basketball games for the organization he was so excited to leave. We’ll see what kinds of interactions that births over the next days and weeks.