Doc Rivers 'assuming' Ben Simmons will play for Philadelphia 76ers, 'but who knows?' 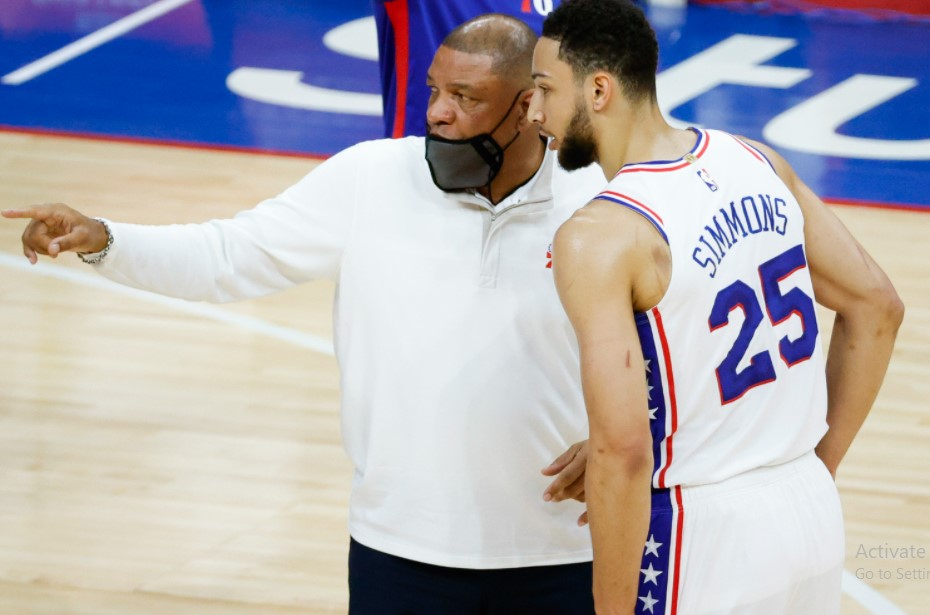 This much is known: Ben Simmons is back in Philadelphia. But there’s no clear sign yet the All-Star guard is set to rescind his trade request and actually play for the 76ers.

Even coach Doc Rivers — publicly, at least — says he’s unsure of the status of the trade demand, the latest wrinkle in the on-again-off-again relationship between Simmons and the Sixers.

“I don’t know. He’s voiced that, but we’ll see how that works out,” Rivers said Wednesday at team practice.

A rescinded request seems improbable, though Rivers said Simmons “was great, he was good” when the two met on Tuesday, a day after the three-time All-Star surprised the franchise by showing up to its arena during a preseason game to take a COVID-19 test.

Rivers said Simmons was scheduled to return to the practice facility late Wednesday for an individual workout and will not practice with the team until he clears NBA health and safety protocols.

That is, if Simmons returns to play at all.

That’s still a big if for the Sixers, especially with one more preseason game Friday at Detroit before next week’s season opener at New Orleans. Much like Marshawn Lynch at a Super Bowl media day, Simmons may be here only so he won’t get fined. The 25-year-old from Australia has four years and $147 million left on his max contract — though the 76ers placed in escrow $8.25 million due to the guard, and fines for missing games and practices could be subtracted from that amount.

Rivers, who turned 60 on Wednesday, said he wanted Simmons to play.

“I’m assuming he’s going to play, but who knows? I can’t get in anyone’s head,” Rivers said.

Rivers said he hasn’t ruled out Simmons traveling with the team to Detroit.

“Whether we play him or not, that’s going to depend on what we see this week,” Rivers said. “He’s coming from behind, because he hasn’t been in camp, obviously. Having said that, do you rush him and put him on the floor? That’s a whole other subject. What we see this week is how we determine everything going forward.”

Simmons missed training camp and the preseason so far in the wake of his offseason trade demand that rankled some teammates, raised the wrath of fans and left many puzzled why he wants off last season’s No. 1 seed in the Eastern Conference.

Sixers president Daryl Morey and Rivers have been publicly optimistic since the start of training camp that Simmons would play again for the Sixers.

Simmons, the No. 1 pick of the 2016 draft, had been paired with Joel Embiid as the franchise cornerstones as the Sixers chase their first NBA championship since 1983. He averaged 15.9 points, 8.1 rebounds and 7.7 assists over four seasons with the Sixers, who drafted him out of LSU, where he played only one season.

The Sixers downplayed potential issues in the locker room, should Simmons return. Starters Seth Curry and Danny Green both said Wednesday they had not talked to Simmons this week but would welcome him back.

“We want him back. We want him with us,” Green said. “When he’s in the building, we’ll acclimate him appropriately. We just want everybody to come here, show up and do their part, do their jobs.”

Added Curry: “I’ll be able to see when he steps on the floor where his head’s at. I don’t feel like he needs to explain anything to me.”