Tributes pour in for Kenya's Agnes Tirop: 'She was humble, focussed and smiling' 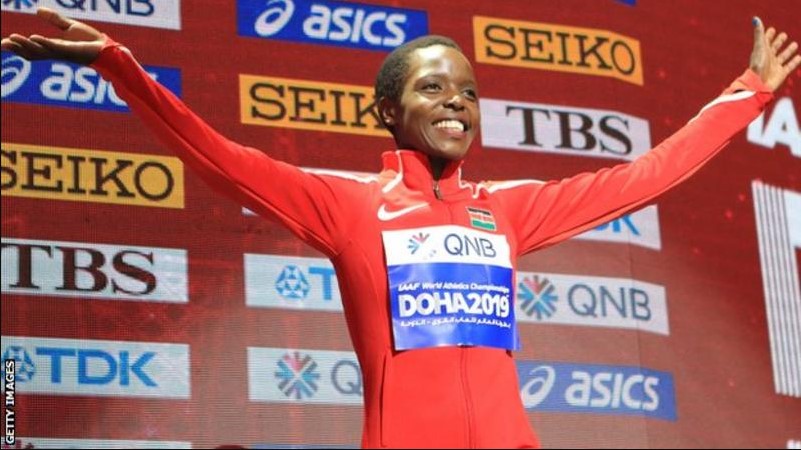 Tributes have been pouring in for Kenya’s Agnes Tirop, who was found dead on Wednesday, with her former athletics captain Julius Yego among those leading the way.

The 25-year-old was found stabbed to death at her home, with police naming her husband as a suspect.

When Tirop, who finished fourth in this year’s Olympic 5,000m final, won 10,000m bronze at the 2019 World Athletics Championships, Yego was her team captain.

“She was an amazing young girl who was really working hard to be one of the top athletes in the world,” Yego told the BBC World Service’s Newsday programme.

“She wanted to be the best and it was only a few weeks ago that she broke the world record for the 10km. Her successful career was still being crafted but unfortunately, someone decided the whole story cannot be written.

At the World Athletics Championships in 2017 and 2019, Tirop won bronze in the 10,000m before finishing 0.75 seconds outside the medal places at the Tokyo Games two months ago.

Last month, she set a new world record of 30 minutes and one second, in Germany, for the 10km road race.

On Thursday, Athletics Kenya – the country’s governing body – suspended all athletics competition for two weeks as a mark of respect for Tirop’s death.

“We just lost a great talent. She was such a strong woman and committed to what she was doing,” said Yego.

Asked how he would remember, the Olympic javelin silver medallist replied: “A young lady who was so peaceful, so humble, always smiling.

“You would never know when she was sad or angry,” he said, adding she was incredibly “focussed on her training and her career”.

“We had a difficult day yesterday – it is still shocking. When you check on social media or TV, it is the sad news of Agnes. We are still collecting ourselves.”

‘Such a friendly soul’

Eunice Sum, an 800m world champion in 2013, was a close friend of Tirop who saw her body when visiting her home on Wednesday.

Like many in Kenya, including President Uhuru Kenyatta, she called on police to find those responsible for her death.

“Agnes was a jovial, ever-smiling lady and I was looking forward to seeing her running in the near future because she was so talented, even in road races,” Sum told BBC Sport Africa.

“Seeing her body was so hurtful for us. I hope Agnes gets justice. Rest in peace Agnes.”

Hellen Obiri, one of Tirop’s rivals on the track, also had high hopes for Tirop.

The 31-year-old won Olympic 5,000m silver in Tokyo two months ago, beating Tirop in the race, yet she was fully expecting her compatriot to take her distance mantle as she moves up to road running.

“It was shocking news to me that Agnes is no more,” Obiri told BBC Sport Africa. “I have raced with Agnes in so many races – recently in Tokyo.”

“I was hoping Agnes would take over from me (as the next track star) but it was an untimely death for her. May she rest in eternal peace.”

Messages of tribute and sympathy have come in from around the globe, as well as closer to home.

“We are deeply shocked to hear the sudden death of our fellow athlete Tirop Agnes,” Halima Nakayi, Uganda’s 800m world champion, posted on social media. “I send my condolences to her family, friends and the Kenyan athletics community.”

“It’s not easy to say goodbye to your ever smiling face,” said fellow Ugandan middle distance runner Winnie Nanyondo. “I can’t believe that you’re no more – such a friendly soul. It’s so painful.”

On Wednesday, both the president of World Athletics, Sebastian Coe, and his counterpart at the International Olympic Committee, Thomas Bach, spoke about the loss of Tirop.

Former double Olympic champion Coe described Tirop as “one of the world’s best female distance runners over the past six years”.

“Athletics has lost one of its brightest young stars in the most tragic circumstances,” he added. “This is a terrible blow to the entire athletics community, but especially to her family, her friends and Athletics Kenya.

“I send them all our most heartfelt condolences.”

Last month, Tirop set the 10km road race world record at the headquarters of her sponsors Adidas in Germany, with the sportswear giants also posting their condolences on social media.