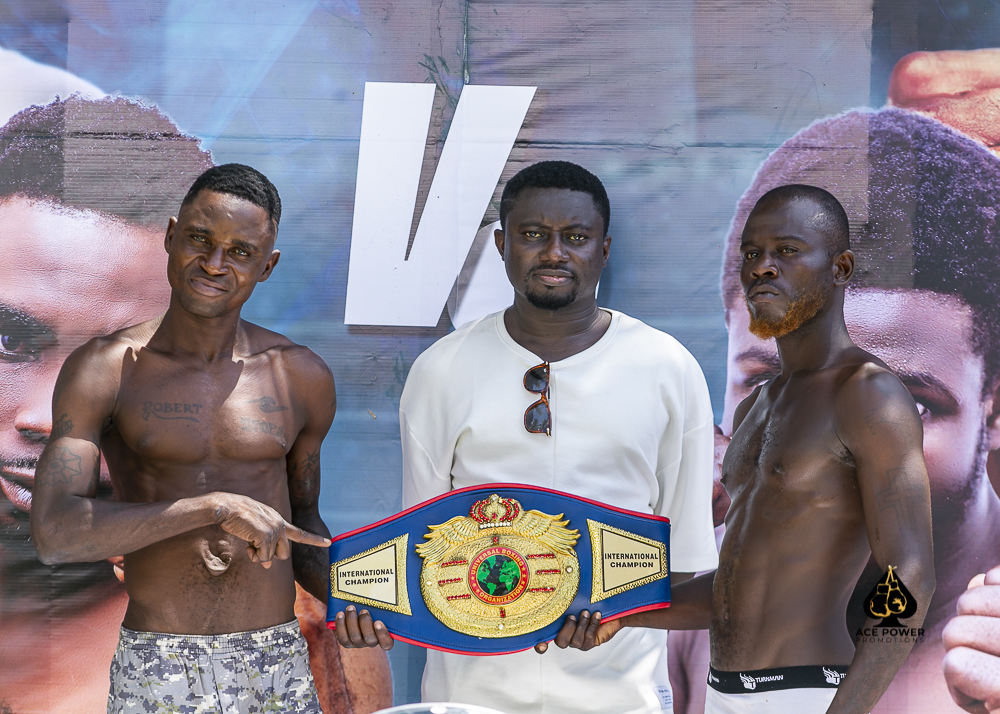 It’s all set for the Danger Zone fight night presented by ACE Power Promotions at La-Palm Royal Beach Hotel tomorrow night, Saturday 16 October, 2021 after all boxers fighting in a total of 12 bouts made their respective weights to set the stage for a showdown in Accra.

“He knows himself that he is coming to learn, he knows I’m too superior for him and he can’t face me so I’m just going to teach him some few lessons in the ring. I don’t like to talk much because I don’t want to expose my tactics but I can assure all my fans that I will stop him so they should come in their numbers,” an obviously very confident Quaye said after making weight.

The ever talking Nukpe however will not be dissuaded in his own conviction his journey from Aflao to Accra won’t be in vain.

“I am ready, if I wasn’t ready I won’t be here. Even if I’m hurt, I will fight because no pain, no gain. I can’t predict the round but I am beating him all the way, this is a redemption fight for me. Robert is a good boxer and I like his style but I will mess up his style,” Nukpe said with poise.

In the co-main feature, 22 year old Holy Dorgbetor (7-0, 5 KOs) of the ACE Power Promotions stable weighed 125.5 lbs against his opponent for the UBO intercontinental and Ghana national featherweight championship billed for 10 rounds, Success Tetteh (10-2, 8 KOs) who made125.7 lbs.

In other fights on the packed bill, former WBO Africa super middleweight champion, Emmanuel Martey (16-1, 12 KOs) made 161.2 lbs whilst opponent, the hard hitting Ghana based Beninois, Naimou Aziz Samson (3-4, 3 KOs) titled the scales at 159.2 lbs for their middleweight contest over 10 rounds.

In an international super bantamweight contest scheduled for 8 rounds between Loren Japhet (10-5, 2 KOs) of Tanzania whose previous fight in Ghana was a defeat to then WBO Africa junior featherweight champion, Wasiru ‘Gyata Bi’ Mohammed and Sheriff Kareem (9-3, 7 KOs) of Nigeria, the Tanzanian weighed 121 lbs whilst the Nigerian came in at 119 lbs.

Meanwhile, former Ghana welterweight champ, Raphael Kwabena King (12-1-1, 10 KOs) tilted the scales at 149 lbs against long suffering Emmanuel Allotey (5-40, 4 KOs) who was way above at 152 lbs for their welterweight contest scheduled for 8 rounds.

Also set to rumble is promising Ahmed Abdula (2-0, 2 KOs), managed by UK based Streetwise Management CEO, Michael Amoo-Bediako, hopes to continue the winning start to his pro career after weighing 177.6 lbs whilst opponent for their light heavyweight contest scheduled for 6 rounds, James Owoo made 177.3 lbs.

ACE Power Promotions stable fighter, Emmanuel Baidoo weighed 153 lbs  for his pro debut against Henry Mensah (0-2, 0 KOs) who tilted the scales at 154.1 lbs for their super welterweight contest billed for 6 rounds whilst another debutant, Samuel Martei Laryea came in at 122.5 lbs for a super bantamweight contest over 6 rounds versus Jonathan Mensah, also on debut.

Below are more photos from the weigh-in:

Loren Japhet of Tanzania versus Sheriff Kareem of Nigeria

Victor Kuwornu takes to the scales