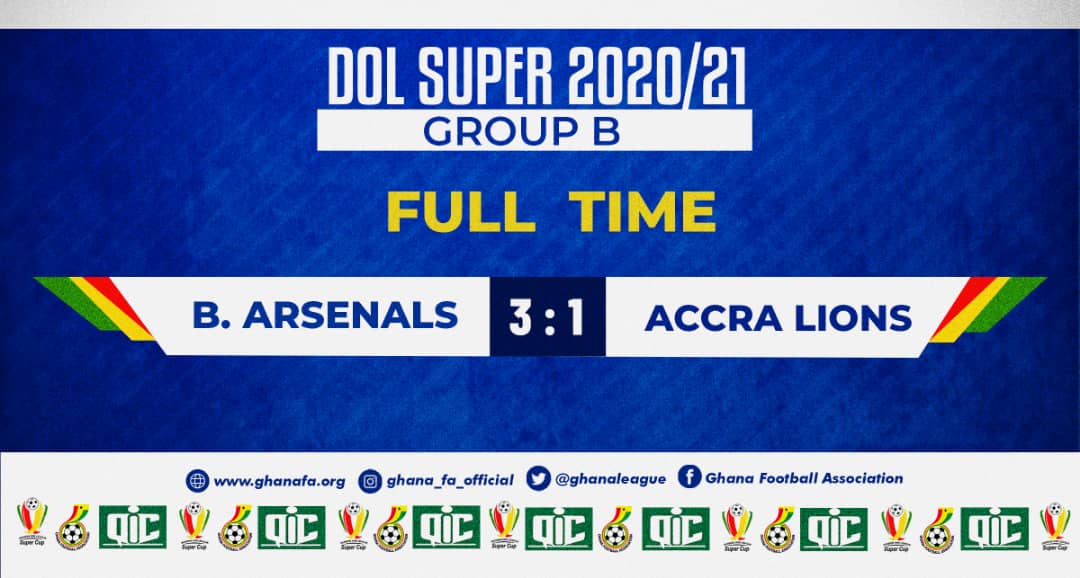 The Gunners who lost their opening game to Real Tamale United saw their goalkeeper Emmanuel Adu sent off in the 77th minute after a dangerous tackle on Accra Lions attacker Rauf Salifu.

Ebenezer Aboagye opened the scoring for Berekum Arsenal in the 40th minute after a string of dilatable passes from the Berekum lads – as they held on to finish the first half with a 1-0 advantage.

Accra Lions pulled parity two minutes into the second half through Shawkan Mohammed. But with an eye on the ultimate, Richard Mahama restored the lead for Berekum Arsenal in the 62nd after connecting from close range.

Despite the lead, Arsenal were dealt a blow in the 77th minute when goalkeeper Emmanuel Adu was sent off after a dangerous tackle on Rauf Salifu.  The Gunners defence remained resolute as they continued to shut out the marauding attacks from the Zone Three champions.

Ebenezer Aboagye put the game beyond the reach of Accra Lions by scoring the third goal – his personal second for Berekum Arsenal to increase the tally to 3-1.

The win takes Arsenal to the second spot in the Group B standings with three points and a win against Samartex 1996 will see them through to the semi-final.

Later this afternoon, Real Tamale United will square off with Samartex 1996 in the other Group B match at 4pm.