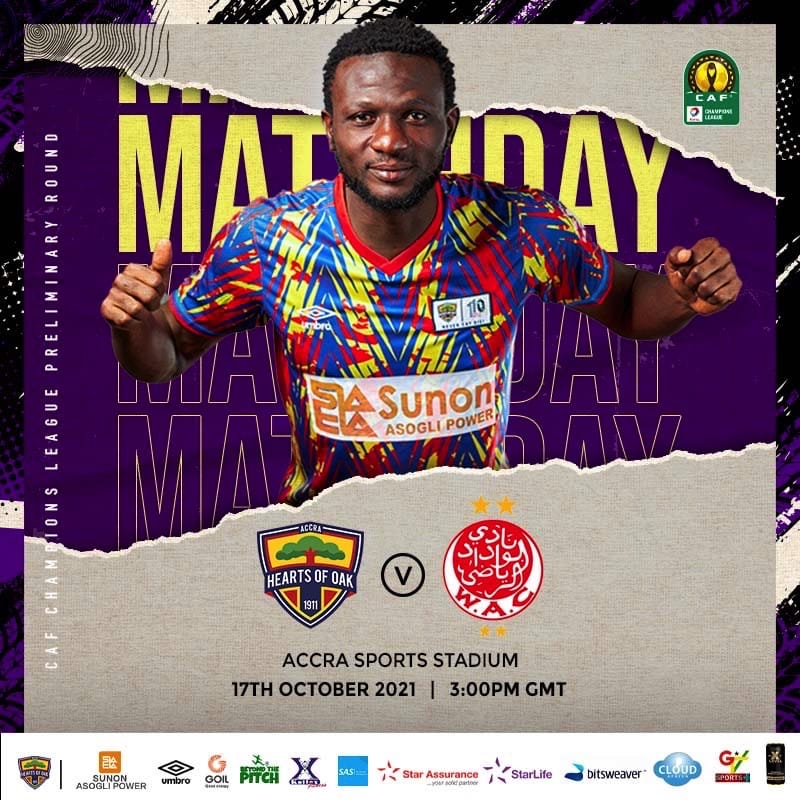 Champions League campaigners Accra Hearts of Oak are facing their first Moroccan challenge against Wydad Athletic Club in the 2021/22 Champions League, 21 years after their encounter with Raja Casablanca.

It is also their 4th elimination encounter with any North African side in 17 years – twice against Etoile Du Sahel; in 2004 and 2006 and once against Esperance Du Tunis 2015.

22 years after a group stage contest with Raja Casablanca, it is Hearts again who meets  WAC in Accra for the first step of a qualification showdown in the middle of October and the match will give fans the chance to play poker online real money in the other entertainment surrounding the game.

The Phobians lost 1-0 away to the and drew 0-0 to Raja Casablanca, blighting their chances of getting into the Semis of the 1999 CAF Champions League.

Much as it is more than two decades of rivalry against any Moroccan side, it is as well a return of a North African scare in six years, having been brutally eliminated by Esperance Du Tunis in the 2015 CAF Confederations Cup playoffs.

It is up to the two legs to decide but a convincing win at home is always a respite for subsaharan African clubs, before they step a foot into the magribian region, were victory is almost always not guaranteed.

Talking about Etoile Du Sahel, the Phobians were able to elimate them in the run-up to the 2006 Champions League after winning on penalties in far away Tunis after 1-1 on aggregate.

That was two years after Sahel knock them out of the Champions league in another penalty shootout in a similar 1-1 scoreline in regulation time, pushing Ernst Middendorp’s side to the maiden CAF Confederations Cup, a competition the Phobians will win by beating Kotoko on penalties under the Legendary Jones Attuquayefio.

The return of the year 2000 Champions into another African adventure under Coach Samuel Boadu has so far seen them beating Guinea’s CI Kamsar by 2-0 in a one-off match played at Accra Sports Stadium following political unrest in Conakry.

If there is any big challenge for the Phobians, or better still any Ghanaian Club, in the CAF Champions league, it is about how to qualify into the group stages.

The last a Ghanaian club played in the money Zone was in 2012 when Berekum Chelsea made a huge impact, failing narrowly to advance into the Semis.

Obviously there is a huge benefit playing in the group stage and it is the WAC of Morocco who now stand between Hearts of Oak and qualification.

Reports indicate WAC are not with their coach and some 5 key players, but their North African identity is what matters most when it comes to Champions League history.

Coach Boadu, as well as 33 out of his 36 registered players, are tasting the continental challenge for the first time and it will take a convincing step in the Accra encounter to put the icing on the cake in Casablanca.