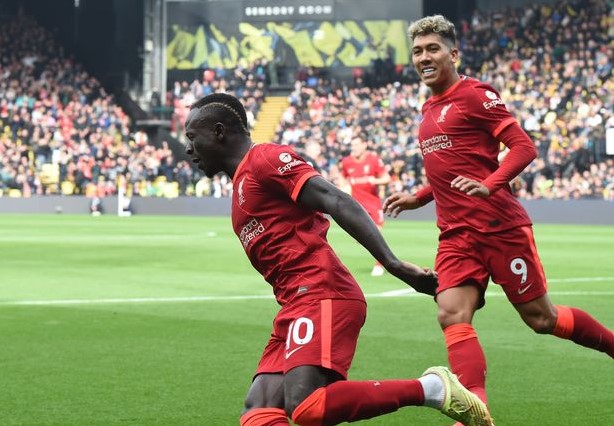 Sadio Mane has become the third player to reach 100 Premier League goals without any of them being penalties.

The 29-year-old opened the scoring as Liverpool beat Watford 5-0 at Vicarage Road on Saturday.

Roberto Firmino grabbed a hat-trick and Mohamed Salah showcased his brilliance with a strike of his own, helping Jurgen Klopp ‘s side reach the top of the table for at least a few hours.

But Mane’s goal was the one to make history, joining former Liverpool striker Emile Heskey and ex- Newcastle and Tottenham Hotspur hitman Les Ferdinand as players to reach a century of converted efforts without any of them being from the spot.

His ninth-minute opener came courtesy of a sublime Salah assist as the Egyptian’s bending ball behind the Hornets’ back line found the Senegal star running on to net past Ben Foster.

Mane has now scored in four of his last five appearances for his club and netted for his country during the international break, hinting that the Merseyside men’s famed front three could well be back.

Firmino scored his first two either side of half-time before setting up Salah to dance around the Watford defence and make it 4-0 by the hour mark.

The Brazilian marksman scored his third of the game and Liverpool’s fifth in the 91st minute, sending them to the league summit as new Hornets manager Claudio Ranieri got his tenure off to a torrid star.

“The special thing is you should not forget Sadio Mane scored 100 without a penalty,” he noted.

Klopp was also full of praise for Salah, adding: “For sure [he is] one of the best [players in the world].

“I see him every day. [Robert] Lewandowski, [Cristiano] Ronaldo, [Lionel] Messi, [Kylian] Mbappe and others will come.