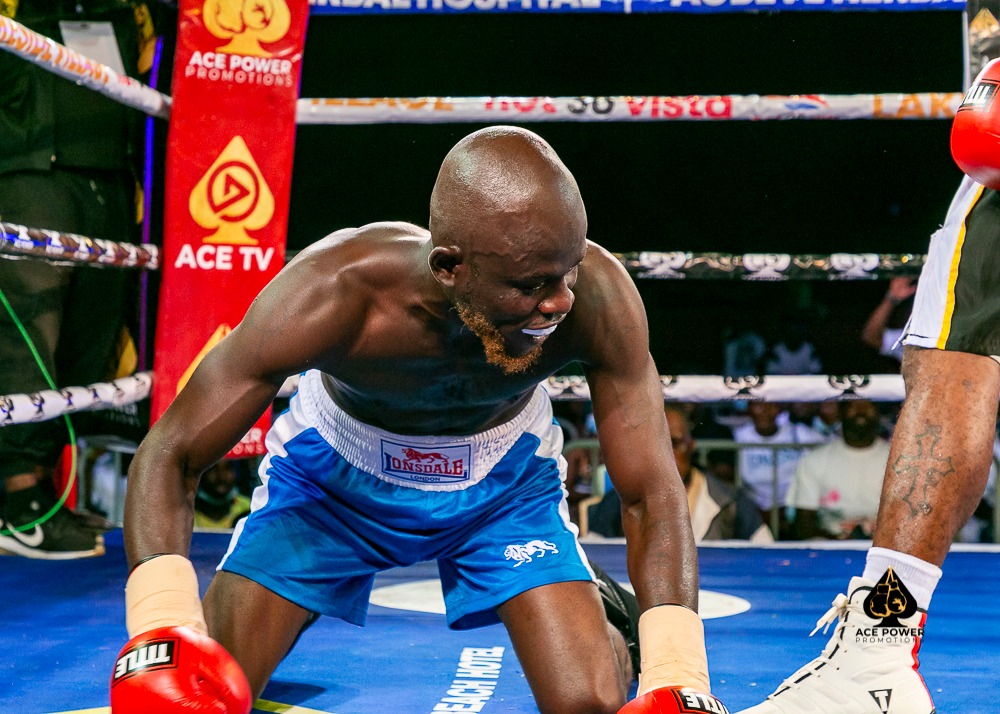 Nukpe down and out after just a minute in round one

Robert ‘Stopper’ Quaye did not need to exert any energy to see off tough talking Nathaniel Nukpe when they finally squared off in the ring Saturday night at the plush La-Palm Royal Beach Hotel in Labadi, Accra, a single uppercut in the opening minute proceed enough to end the fight and hand the victor the Universal Boxing Organisation (UBO) super lightweight championship.

Quaye, a former WBO Africa titlist, had gone into the fight warning promoters and matchmakers he could one day kill somebody in the ring if ‘proper’ opponents are not arranged for him but the ever talking Nukpe swore he was going to render his opponent’s ‘Stopper’ nickname unworthy by handing his a first career defeat in the headliner of ACE Power Promotions’ fight show dubbed ‘Danger Zone’.

In the end, Quaye needed just one clean punch in the very opening round to send Nukpe sprawling on the canvas before many had even started watching the fight. the Aflao based boxer did however get up swiftly before referee Shadrack Acquaye could even finish the mandatory count. Surprisingly however, Nukpe refused to fight on citing his frustration at the singing of the Togo national anthem for him before the start of the bout when everybody knew he was a Ghanaian.

“I am very disappointed and feel insulted, how do you play Togo national anthem for me when I am not a Togolese? I won’t fight again because the promoters and organisers have disrespected me,” he bluntly told Sportsinghana.com right in the ring afterwards.

For the unstoppable Quaye, it is now victory number 20 in a row to start his career with 17 KOs to back, annexation of another title and another huge statement of his highly rated potential as he pushes for clashes with the big boys of the division.

“This was just a sparring session that ended too quickly, Nukpe knows himself what he was up against and decided to quit to avoid the punishment I had planned to give to him tonight. I am obviously delighted to win this title but I am also disappointed the fight ended this quickly,” a highly confident Quaye said after the bout.

“I’m ready to take on the world, all of the world champions in the super lightweight division should know that Robert Quaye is ready for them even today. I need big fights against big opponents because that is my level,” he added, full of poise.

In the co-main feature, 22 year old Holy Dorgbetor won the first titles of his career after dominating countryman Success Tetteh over twelve rounds to secure the Ghana national and UBO intercontinental featherweight titles, winning every round on every scorecard. Dorgbetor, now 8-0, 5 KOs scored a knockdown in round 8 and two more in the final stanza as he won comfortably a unanimous decision, 120-106, 120-105 and 119-105.

Also victorious on the night was debutant Emmanuel Baidoo of the ACE Power Promotions stable after stopping Armah Tetteh in 5 rounds of their super welterweight contest to get his pro career off to a winning start.

In other fights, Tanzania’s Loren Japhet (11-5-2, 3 KOs) got a second-round knockout win over Nigerian Sherif Kareem (9-4, 7 KOs) in their super bantamweight contest, while Raphael King stopped Emmanuel Allotey in round five of a welterweight contest.

Emmanuel Quartey aka “Akufo-Addo” beat Billy Quaye in round two in their super featherweight fight.