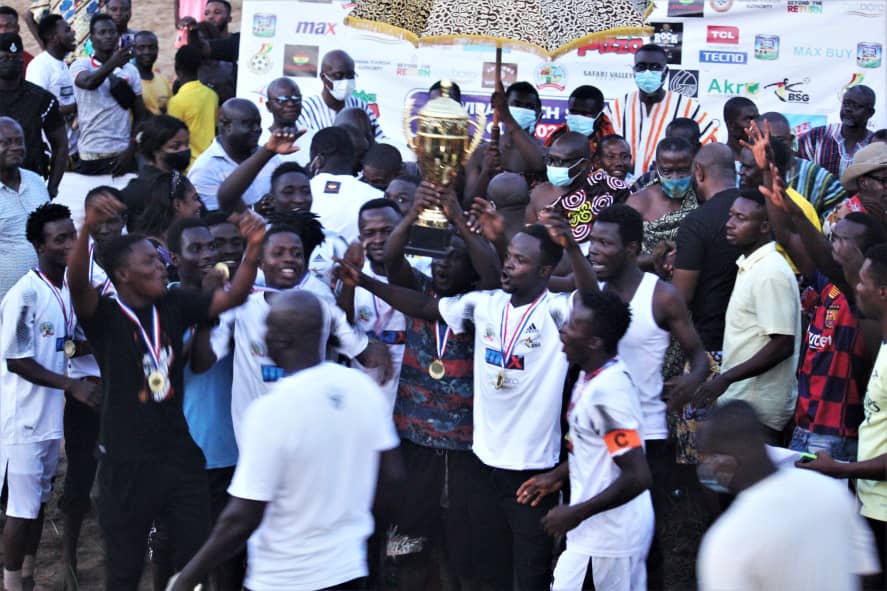 The maiden edition of the 2021 Odwira Beach Soccer Cup was clinched by the host town Asenema as they beat Mampong in an exciting penalty shootout.

The first-ever inland Beach Soccer tournament under the auspices of the Okuapemhene Oseadeayo Kwasi Akuffo III saw twenty towns in the Okuapeman enclave contesting the giant Golden trophy sponsored by Betboro under the theme “Sand to Gold; Beating COVID-19”

Anenema starting line up for the final

Chairman of the GFA Beach Soccer Committee Yaw Ampofo Ankrah along with the CEO of the Okere District Assembly Hon Kenneth Daniel Addo nurtured the idea of a novelty tournament a few months earlier. This was followed by the clearance of virgin forest and the transformation of the land into a mini Beach soccer arena.

Local leaders and international guests also accompanied Oseadeeyo Kwasi Akuffo III as the young King made a grand entrance to the venue.

In his brief address, before the final match kicked off, Oseadeeyo Kwasi Akuffo III expressed his profound gratitude to the DCE, the Chairman of the Ghana Beach Soccer Committee, the sponsors and Max TV as well as other media partners for bringing such a concept to Okuapeman as host of the first-ever beach soccer inland tournament.

“I’m very excited to be here today to witness this beautiful game for the first time on sand. I had an interaction with DCE about this laudable initiative and I asked him whether it was possible and his response to me was that he has been thinking about this for a very long time so he will do it for me to celebrate the 2021 Odwira festival to honour me and Okuapeman”.

Oseadeeyo Kwasi Akuffo III added that he has been monitoring the vigorous work and sacrifices by all involved and believes this is the beginning of a transformation of the landscape for Sports Tourism, as well as the potential creation of new jobs for locals.

Action from the final

Sensational Richard Osa of Mampong grabbed the most valuable player of the tournament for his fantastic performance while Alex Adjei from Dawu also won the goal king title with seven goals.

The final match was telecast live on Max TV making it the first time a Beach Soccer game has been broadcast on a local television network.

Below are more photos from the tournament: