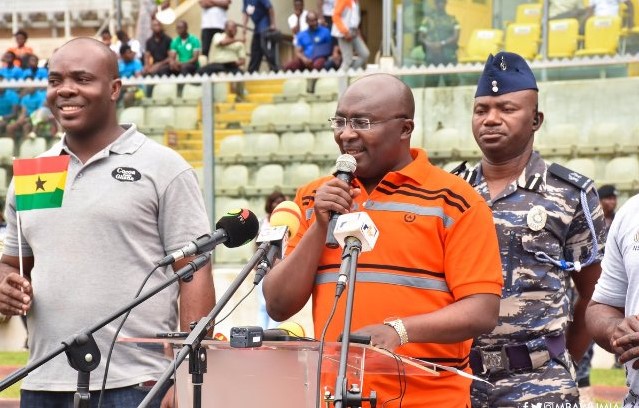 Ghana Vice President Alhaji Dr Mahamudu Bawumia will be the Guest of Honour at the maiden edition of the prestigious Tamale Marathon that roars off on Saturday November 6, next month.

According to organisers, the Office of the Vice President has confirmed the Veep’s involvement in an event that is expected to see first-placed winners (both male and female), swaggering away with a lip-smacking prize of GH¢10,000 each.

Other prominent personalities that will be ‘staging an appearance’ include the Mayor of Tamale, Haruna Iddrisu, Member of Parliament (MP) for Sagnarigu, A.B.A Fuseini, MP for Tamale Central, Ibrahim Murtala Mohammed and MP for Tamale, North Alhassan Sayibu Suhuyini.

Founder of Total Marketing and Tours, Mr Charles Cobbina, who initiated the 21-kilometre Tamale Marathon, told the Times Sports yesterday that all first 10 finishers would benefit from entrepreneurial training by one of the marathon’s partner institutions.

“It is the intention of the promoters of the Tamale Marathon to make the prizes and awards one of the most lucrative in Ghana with the belief that the cash prizes and awards accrued will go into education or provide capital to start up a business,” he emphasised.

Before dashing for the prizes, all participants are expected to pay a registration fee of GH¢20 between now and November 6 after which they would be given a running vest, a running number, water, accommodation for a night and water during the race. Participants will also have to undertake COVID-19 protocol procedures.

Again, participants will also be expected to plant a tree seedling during the event as part of their contributions towards the Green Ghana Tree Planting Advocacy and Campaign.

The marathon is expected to bring International attention to the city of Tamale and the northern regions for sports and business.

“The Tamale Marathon is also to create and nurture enduring champions, create a market place of business and social issues advocacy as well as begin the agenda of local sister cities – using Tamale and Takoradi as pilot,” Mr Cobbina asserted.

Beginning from Zoozugu along the Yendi-Tamale road, the marathon will whoosh through the dual carriage way in front of the Tamale Teaching Hospital, the Central Mosque road, Picorna Hotel, West Hospital, Aboabo Market traffic light, Abedi Pele Roundabout to the Aliu Mahama Stadium.