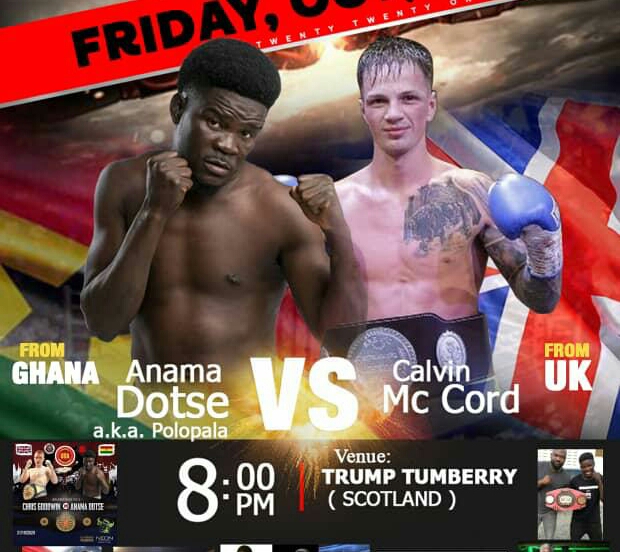 Sam Kynoch, the promoter for the hitherto scheduled bout between Ghanaian boxer, Dotse ‘Polopala’ Anama (22-4, 17KOs), and Scottish boxer, Calvin McCord (8-0, 2KOs) has announced the bout has been rescheduled to 2022.

He disclosed this in a reply tweet to GBC’s Volta Star Radio Sports Broadcaster, Tilda Acorlor when she tweeted about the upcoming bout with her handle.

“Sadly this contest is off due to Calvin picking up an injury But it will be rescheduled for 2022,” Sam Kynoch said.

However, the Ghanaian pugilist Dotse Anama said he has not been communicated to by promoters of the bout.

“I was not informed and I am not aware of the postponement all I know is I am preparing to leave Ghana on Monday,” Dotse Anama said.

A lightweight contest between Dotse Anama and Calvin MC Cord was arranged for Friday 29, October 2021 at the Trump Turnberry, Scotland but obviously will now happen next year, according to the promoter.