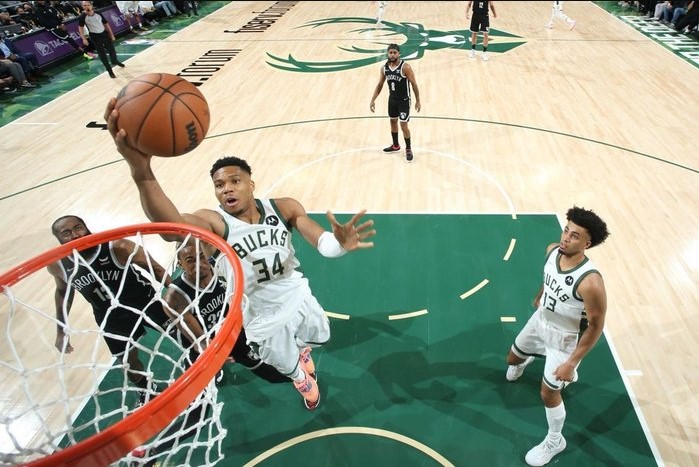 On Tuesday night, Giannis Antetokounmpo scored 32 points to lead the Milwaukee Bucks to their first title defence in half a century, a 127-104 victory over the Brooklyn Nets.

Antetokounmpo had 14 rebounds and seven assists in his first game since scoring 50 points in a title-clinching Game 6 NBA Finals victory over the Phoenix Suns.

Jrue Holiday, who sat out the second half with a bruised right heel after scoring 12 points, was replaced by Khris Middleton and Pat Connaughton, who both scored 20 points to help the Bucks overcome his absence.

Kevin Durant had 32 points and 11 rebounds to lead the Nets. Patty Mills scored 21 points on 7-of-7 3-point shooting. James Harden chipped in with 20 points.

The Nets were without star player Kyrie Irving, who was unable to play due to his refusal to receive a COVID-19 vaccine.

Professional athletes on local teams must be vaccinated in order to practise or play in public venues, according to a New York law. Rather than employing Irving only in road games, the Nets decided that he would not play or practise with them until he was able to fully participate.

The Bucks overcame the club who nearly eliminated them in the second round of the playoffs after collecting their rings and hoisting a banner to commemorate their first NBA title since 1971.

After Durant’s foot just moved across the 3-point range in the waning seconds of regulation, turning a potential series-winning 3-pointer into a game-tying 2-point score, Milwaukee rallied from a 2-0 deficit to win Game 7 in overtime at Brooklyn.

Jordan Nwora, a 2020 second-round selection who wasn’t in the Bucks’ rotation as a rookie but could be poised for a greater role this season, led Milwaukee with 15 points. Grayson Allen scored 10 points in his first game with the Bucks.

The Nets have been battling with Kyrie Irving’s lack of availability to this point, as the entire basketball world knows, and it appears to have been one of the main contributors in their loss to the defending champions, as Brooklyn battled to keep pace with Milwaukee for much of the night.