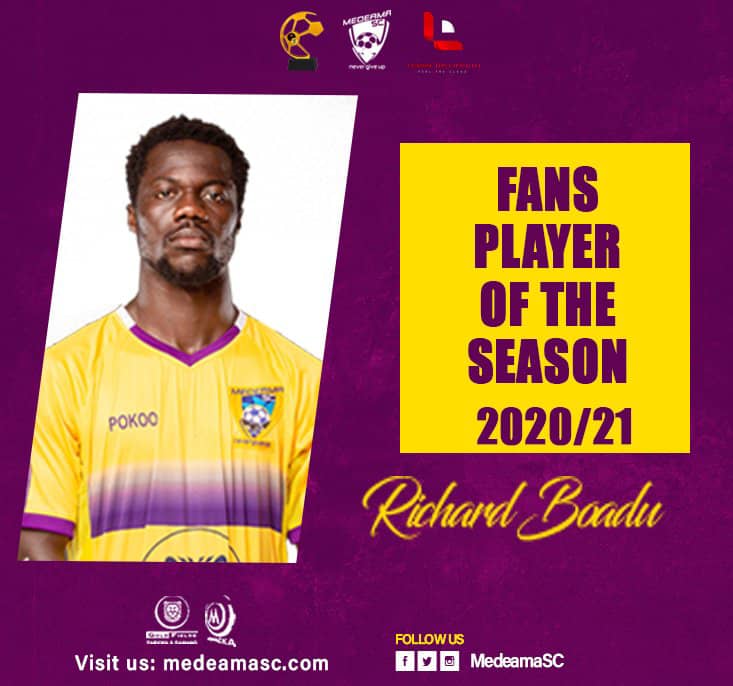 Asante Kotoko new midfielder Richard Boadu ‘Agadas’ has been announced as the winner of 2020-21 Premier League Medeama Fans’ Player of the Year.

The 26-year-old, who played last season with Medeama was seen as the stand-out performer for the Yellow and Mauve in the campaign, winning several duels and protecting the club from conceding several goals.

Boadu’s effort was, however, not enough to help the Medeama win the league title nor finish within the Top Four after they ended in five place behind winners Hearts of Oak, Asante Kotoko, WAFA and Berekum Chelsea.

Fans have, however, appreciated the midfielder’s impressive showings and overwhelmingly voted him as their best-performing player of the campaign although he has even left the club to join Asante Kotoko.

He was part of the Porcupine Warriors squad that toured Dubai for their pre-season ahead of the start of the new season.

DISCOVERY OF THE SEASON

BEST DEFENDER OF THE SEASON

BEST MIDFIELDER OF THE SEASON

BEST FOWARD OF THE SEASON

GOAL OF THE SEASON

FANS’ PLAYER OF THE SEASON

PLAYER OF THE SEASON