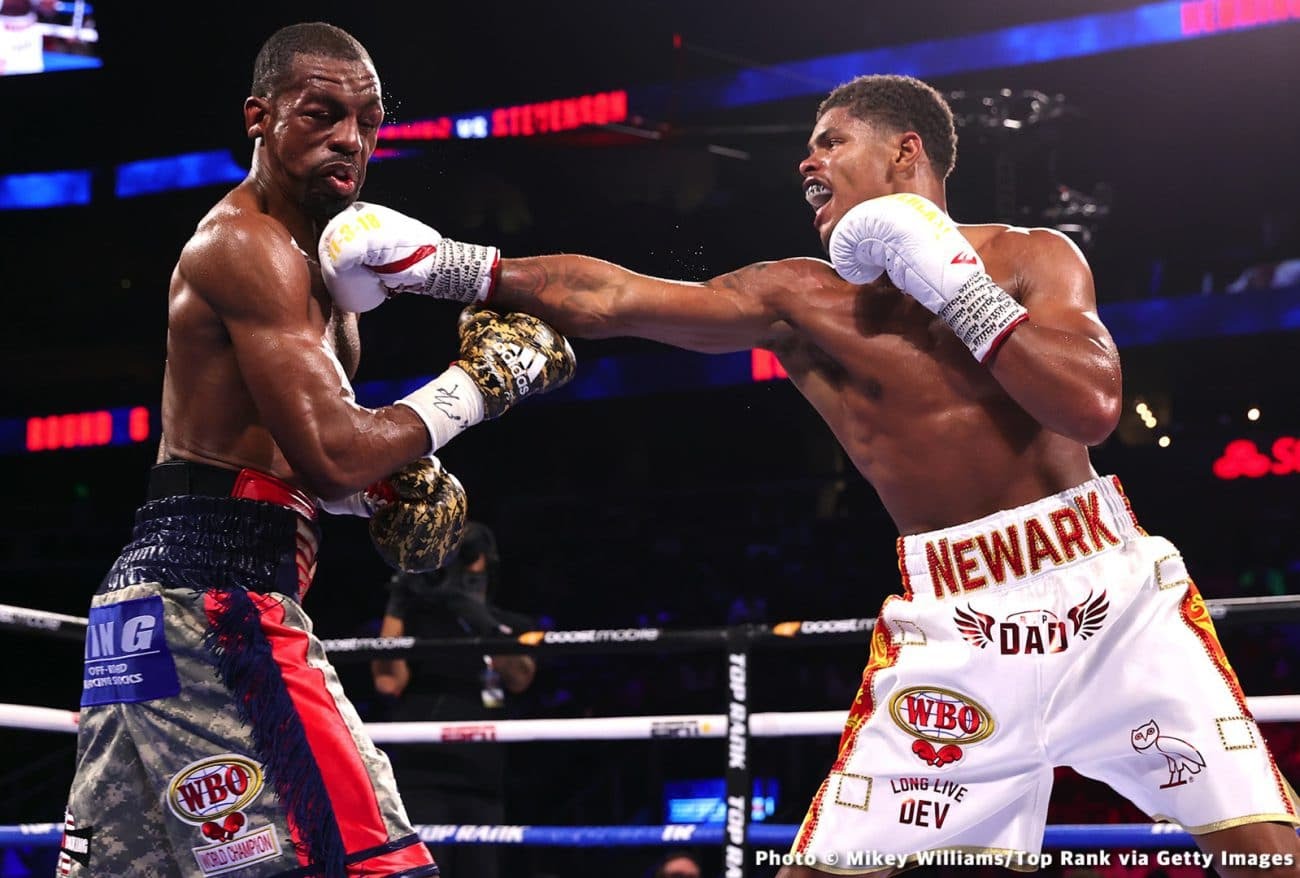 Stevenson picked Herring apart with accurate punches on the outside and the inside. It didn’t matter. There was no area where Stevenson didn’t dominate the 35-year-old Herring.

In the 10th, Herring was cut over his right eye. The referee Mark Nelson stopped the action and had Herring’s cut examined by the ringside doctor.

When the fight resumed, Stevenson tore into Herring, hitting him with shots on his cut. With the way Herring looked defenseless, the referee had no choice but to halt it, which he did in the 10th.

It’s going to be up to Stevenson’s promoter Bob Arum if he’s going to let him take the fight with Valdez. It’s not a good sign that Arum didn’t comment on Stevenson’s call out of Valdez.

Perhaps one reason for that he’s interested in matching Stevenson against Emanuel Navarrete next. That’s a fight that Arum said this week that he would want to make if Shakur successfully defeated Herring,

“There’s only one fight left,” said Stevenson after the fight. “It’s the biggest fight at the end of the day. Oscar {Valdez} can’t keep ducking. It’s time for him to fight. There’s nothing else to look forward to. The 130-pound division needs to unify. Let’s get it!

“I want to be a superstar in the sport. I’m here to last. I take my craft very seriously. I’m disciplined,” said Stevenson.

“My mindset was, ‘I’m going in there to take the belt.  I’m not going to make this close or make it what they expect it to be,’” said Shakur Stevenson at the post-fight press conference in reacting to his win over Herring.

“I wanted to dominate. And I dominate all my fights, and nothing is going to change with anybody in front of me. I don’t care who it is,” said Shakur.

“That’s what I was thinking in the fight,”  said Stevenson about him remembering during the fight how people had said he was boring. “I was thinking, ‘I’m not going to back up.’

“Most definitely,” said Stevenson when asked if he enjoys fighting aggressively and pressuring his opponents. “I got dog in me. People have to understand that too.

“I’m from Northern New Jersey. I’ve always had dog in me. I don’t know why people always think that I don’t got dog in me because I dominated and made it look easy.

“And I got both sides in me. I can box, and I can fight. I’m more than just a boxer. No, not at all,” said Stevenson said when asked if the fight was easier than he expected. “Jamel is a tough fighter.

“He was in good shape; he’s got a great team and a great game plan. I’m not going to say it was easy.You got to respecct Jamel. He’s a hell of a fighter, and I was just the better man.

“I can’t make you a friend when I’m fighting you.  So I’ve got to make you an enemy,” said Stevenson.