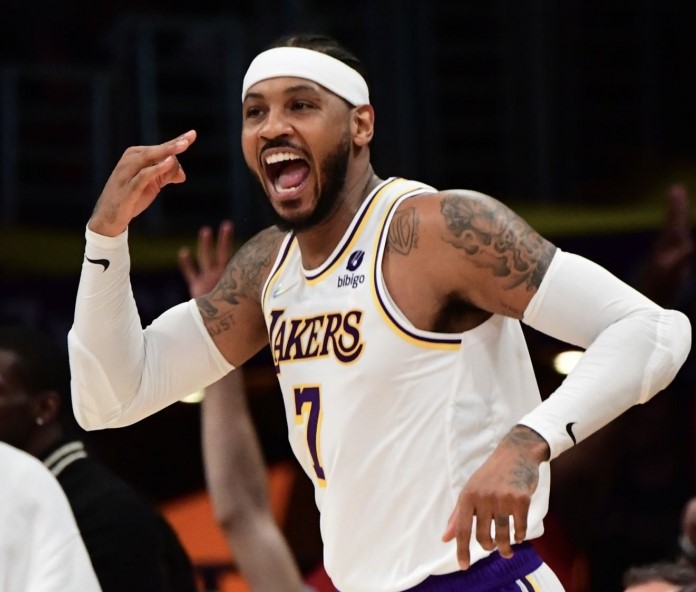 Carmelo Anthony scored a game-high 28 points, moving into ninth place All-Time in NBA scoring as the Los Angeles Lakers defeated the Memphis Grizzlies 121-118 to pick up their first win of the season in front of a sellout crowd at Staples Center on Sunday night.

Anthony received the game ball after his historic night, admitting it was hard for him to think about the moment entirely.

The Lakers played a tribute video of Anthony on the Jumbotron in the fourth quarter while fans loudly chanted “Melo!” He moved up to 27,423 career points and passed Moses Malone (27,409) while doing so.

“I keep saying it’s an honor and blessing to be on that list and pass Moses (Malone) for what he did for the game of basketball,” Anthony said.

Los Angeles (1-2) snapped its two-game losing streak with the win, while Memphis (2-1) lost for the first time after starting the season 2-0.

“It’s hard to put into words, I’m still kinda hip doing it,” added Anthony. “That’s what I get excited about, I’m here in year 19 still doing what I’m able to do. Still passionate about the game…what better night to reach ninth than with a win the way we needed a win tonight.”

Grizzlies star Ja Morant was fouled on a three-pointer with 2.5 seconds left in the fourth with a chance to tie the game but missed the final free-throw allowing the Lakers to run out the clock.

Morant was impressive finishing with 40 points, 10 assists and three steals, making highlight plays throughout the game that kept Memphis within striking distance until the final buzzer.

“I really don’t care about what I’ve done tonight,” Morant said. “I missed a free throw to tie it. That’s pretty much the only thing on my mind.”

Anthony Davis had 22 points and four blocks, LeBron James scored 19 and Russell Westbrook had 13 points, 13 assists, and seven rebounds for the Lakers.

After going winless in preseason and dropping the first two games of the season, Davis described the night as feeling good to “kind of get the monkey off our back with a win.”

Memphis held a double-digit lead in the first quarter, but Los Angeles used a 27-9 run to take a 39-28 lead in the second only before holding a 62-56 halftime advantage.

Anthony made two three-pointers in the third and two more in the fourth as the Lakers outscored the Grizzlies 48-22 in points off the bench.

“I think it’s always sweeter when you win and even more sweeter when it just happens organically,” James said on seeing Anthony move up the scoring ranks. “He was playing straight up flow and rhythm basketball. To move into ninth all-time on the scoring leaderboard is special. Usually, when some of my friends have these kind of achievements, I text them or call them or Facetime them and put something on social media. In this case, I got to do it in person because he’s my teammate now. I got to do it in person. That made it special for me.”

Morant drove to the basket with 50 seconds left but his shot was blocked by Davis at the rim which allowed the Lakers to hold on for the 121-118 win after the Grizzlies star guard missed the tying free throw in the closing seconds.

“I just think there’s a feeling about our group that we’re OK,” Vogel said. “We have a lot of work to do, and we’re willing to put in the work.”

The Lakers will next prepare for their first road trip of the season, taking on the San Antonio Spurs (1-2) on Tuesday, followed by the Oklahoma City Thunder (0-3) on Wednesday.