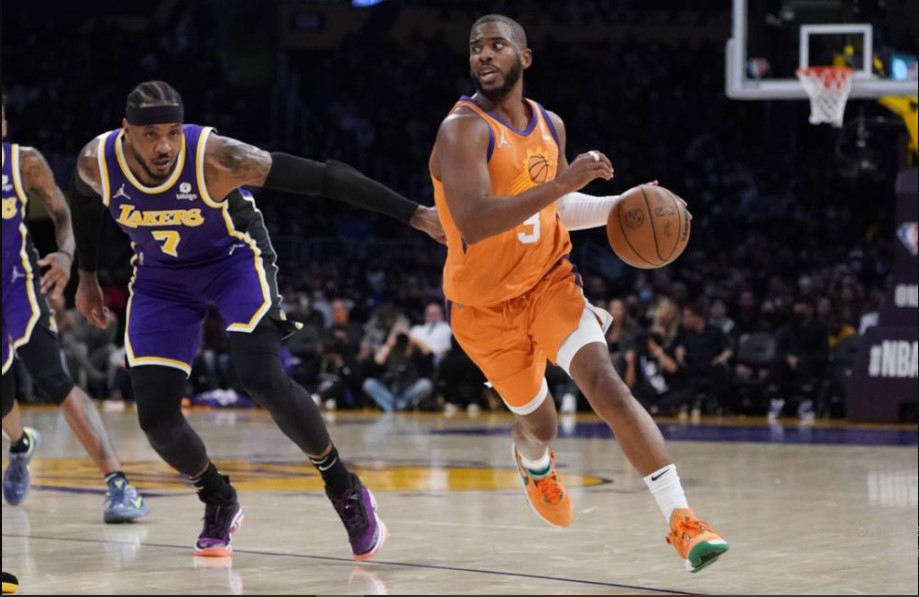 Chris Paul had a team-high 23 points, all while making history becoming the first player in NBA history to reach 20,000 career points and 10,000 assists, as the Phoenix Suns defeated the Los Angeles Lakers 115-105 on Friday night at Staples Center.

Paul received the game ball following the win and happily admitted he wanted to remember his moment of history once his playing career is over someday.

“When you get done playing this game, you want to have things to remember things. I’m going to keep this for sure,” said Paul, who also recorded 14 assists.

The Suns (1-1) picked up their first win, while the Lakers dropped to 0-2 on the season.

Devin Booker scored 22, Mikal Bridges had 21 and the Suns led by as many as 32 in the third quarter with the Lakers making a late push in the fourth only to fall short with a double-digit loss.

Phoenix fed the ball down low early and often, outscoring Los Angeles 50-20 in points in the paint. The Lakers had 15 turnovers on the night as well.

“Usually when you get hit going to the basket, the whistle blows. It didn’t tonight,” said Lakers coach Frank Vogel on the way the game was called.

LeBron James scored 25 points and Russell Westbrook had 22 points, 11 rebounds, and nine assists for the Lakers. Anthony Davis scored 18 of his 22 points in the second half as the team trailed by 13 at the half, 57-44.

Booker scored eight consecutive points in the third and the Suns advantage ballooned to 80-55 with 5:12 remaining in the period.

“There’s a process along with building something to become the team you want to become, and I know it firsthand,” James said on the loss. “It doesn’t happen overnight, as much as you want it. It just takes time, and we’ll know when that time is. Right now, we’ve got to continue to just push.”

The Lakers had moments of frustration in the second half, as Davis and teammate Dwight Howard were visibly upset with one another, resulting in pushing and shoving from the bench.

Both players described the altercation as a heat of the moment scuffle and the situation being over with.

“We just had a disagreement about something that was happening on the floor,” Howard said. “We’re both very passionate about winning. We didn’t want to lose this game. We got it out of the way. We’re grown men. Things happen. But we already talked. We squashed it. There’s no issues between me and him. And that’s my brother. That’s my teammate.”

“It’s over with,” said Davis. “After the situation happened, me and DH talked about it … and we left it in the locker room at halftime.”

Vogel noted that those types of things can happen when you are getting outplayed, and tempers can easily rise.

“We’re good. Just two guys that are competitive and want to win games,” Vogel added on the mishap.

Los Angeles also dealt with a heckling fan who was ejected after going back and forth with Rajon Rondo. The Lakers veteran guard pointed out the fan to security before he was sent away for slapping away Rondo’s hand in the exchange.

“We’re just trying to get it together,” Howard said. “This is our second game. A lot of people are counting us out already. A lot of people laughing at us and joking. But we know what’s on the line. We want to win. We’re very passionate. We want 18 (championships for the Lakers), so we’re not going to stop until we get there.”

The Lakers will be back in action on Sunday evening looking to get their first win of the season when they host the Memphis Grizzlies (1-0) at 6:30 p.m.