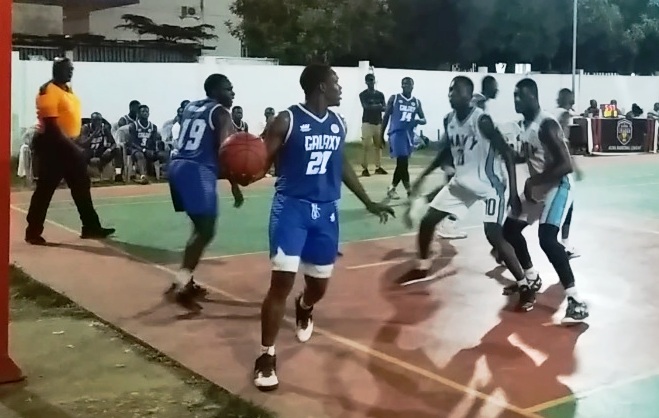 Earlier today at the Prisons Court in Cantonments, Tudu Galaxy produced an impressive at the both ends of the court to clinch its first win in the 2021 Accra Basketball League (ABL) Men’s Division II Playoffs.

Galaxy recovered from 50-56 loss to TUSK Foundation a couple of days ago, to secure a 69-52 win over Ghana Navy in an entertaining game. The win breathes life into Galaxy’s quest to win the division title.

Jedidiah Akapkameh for Reformers and Samuel Abekah got in on the scoring act off the bench in the second quarter. Ollenu and Abekah scored to shave the deficit down to five (15-22). Ollenu’s big block on Atta Badu ignited sparked Navy’s offense into life.

Abekah scored four points and Selassi Wornyo added two more to trail 23-24 with 1:55 minutes before a timeout was called. Raymond Affram stole the ball and scored to stop Galaxy’s hemorrhaging of points. Galaxy led 26:23 at half time.

Both teams got points on the board via free throws early on. Quartey stole the ball and scored with Mohammed adding a layup. Lartey Tawiah scored two free throws but Navy was guilty of too many turnovers as it trailed 30-35 with 4:34 minutes played.

Quartey and Affram got big three pointers to stretch Galaxy’s lead to nine (41-32) and Bismark Addai scored a layup off Affram’s assist on a fast break off another turnover. Affram buried all two free throws to give Galaxy a 49-39 lead.

A deflated Navy had no answers down the stretch as Galaxy walked away with a strong closing performance to clinch a 69-52 win with Muhulis Futa hitting a late three pointer.