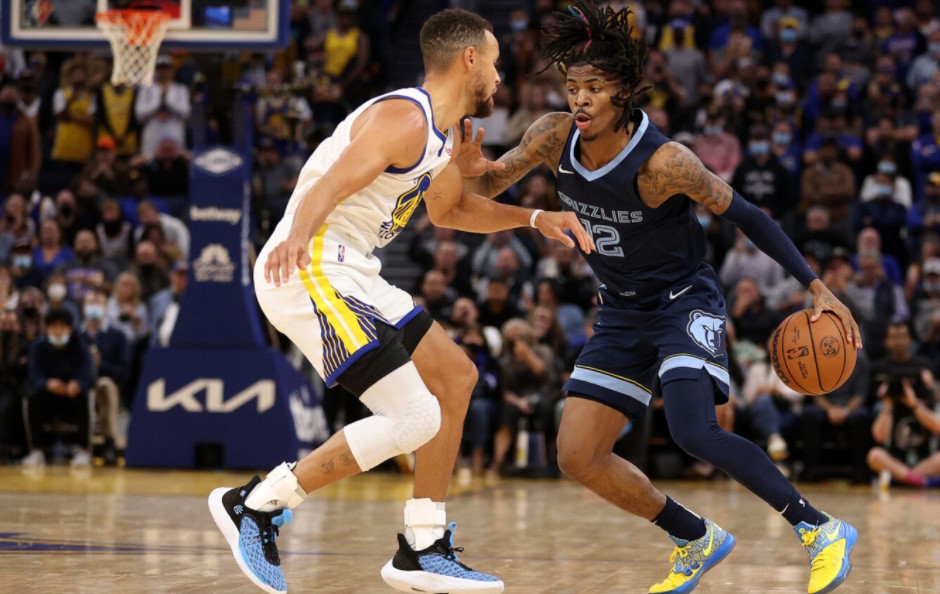 In his third NBA season, Ja Morant is speaking up during timeouts and showing his growth with every big basket.

He and his supporting cast are defending with energy and doing all of the important little things.

Morant made a driving layup with 57.9 seconds left and shined in Stephen Curry’s home building once again, scoring 30 points as the Memphis Grizzlies made it two straight thrilling overtime wins against the Golden State Warriors with a 104-101 victory Thursday night.

“He’s just taken huge steps all around, as a player, as a leader, he’s finding his voice,” coach Taylor Jenkins said. “… His voice is just resonating throughout.”

Curry wound up with 36 points, but went scoreless in the fourth quarter and overtime — 0 for 6. He missed two key 3-pointers late in a rematch of the play-in game from five months ago that Memphis won 117-112 in OT on May 21 at Chase Center.

Curry couldn’t convert a 3 to end regulation, leaving the teams tied at 98, then another with 1:18 remaining in the extra period to finish 7 for 20 from deep in the Warriors’ first loss following a 4-0 start.

Desmond Bane scored 19 for the Grizzlies, who ended a two-game skid and concluded their four-game West Coast trip with a back-to-back following a 116-96 defeat at Portland on Wednesday night. Morant shot 11 for 22.

“He figures out how to score late game,” Jaren Jackson Jr. said.

Damion Lee added 14 points off the bench for Golden State.

Jackson’s 3-pointer got the Grizzlies within 86-84 at the 7:45 mark of the fourth, then Memphis capitalized on a turnover by Andre Iguodala and tied it the next time down on De’Anthony Melton’s short jumper.

That started a furious, back-and-forth finish reminiscent of the thriller from five months earlier.

Draymond Green gave everyone a scare when he went down grabbing his knee with 2:50 left before halftime but he was fine and wound up with a key block — one of his five on the night — and rebound in the final 18.3 seconds. He had 12 boards and seven assists.

“I thought we had an easy start to the second quarter and then we got a little crazy,” Warriors coach Steve Kerr said.

Curry, playing 12 years to the day after making his NBA debut, shot 11 for 29 and also contributed eight assists and seven rebounds as the Warriors began an eight-game homestand. They had their best start since beginning 24-0 in 2015-16.