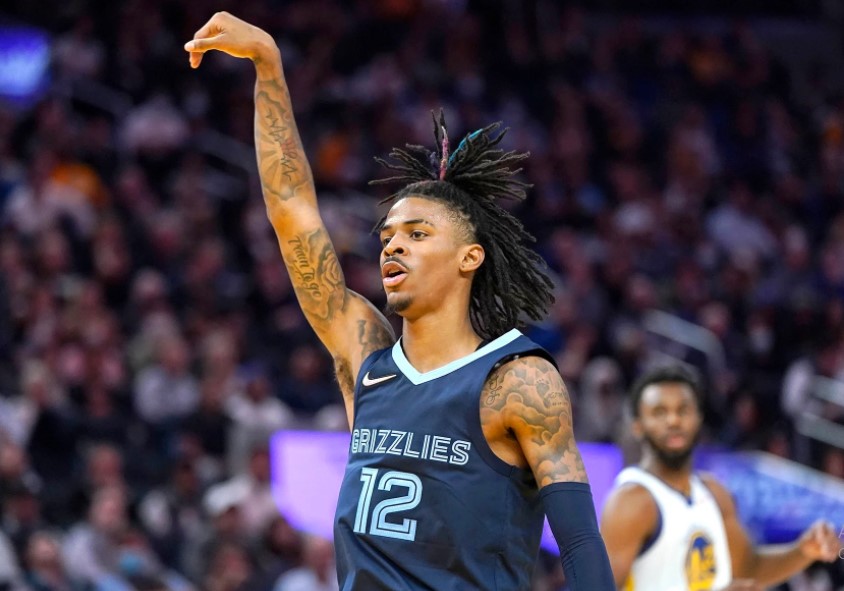 This spin delivered a Memphis win in overtime Thursday over Golden State at the Chase Center to accentuate a dizzying start to the 2021-22 season for Grizzlies point guard Ja Morant.

Morant lit up the Warriors for 21 of his 30 points in the second half on 7-of-11 shooting, while gobbling up three of his game-high tying four steals, as Memphis fought back from a 19-point deficit to serve up Golden State its first loss of the season 104-101 in overtime.

“He’s just taken huge steps all around,” Grizzlies coach Taylor Jenkins said. “As a player, as a leader, he’s finding his voice. He’s been finding it for the first two years. But even now, [he’s got] just more confidence in what he’s got to do to help lead this team. There’s been so many moments in this early part of this season, especially tonight’s game, just his positivity, just communicating with the guys in the flow of the game, [and] in timeouts his voice resonated throughout.”

Morant checks in at No. 4 in our first edition of the Kia Race to the MVP Ladder, after pouring in 28 points or more in four of Memphis’ first five games to sit tied with Golden State star Stephen Curry for the NBA scoring lead (30.4 points per game). He’s also averaging 7.8 assists and 5.4 rebounds per game in pushing the Grizzlies to a 3-2 record out of the gates.

The 2019-20 Kia Rookie of the Year, the 22-year-old Morant recently expressed disappointment about missing the NBA All-Star game in his first two seasons. Perhaps now it’s time Morant set loftier goals, especially if the young star continues to perform at this level.

“I was in a position to be an All-Star my first two years and didn’t make it,” Morant told Chris Haynes of Yahoo Sports. “That bothered me a lot. So, I just stopped focusing on that and just [focused] on my play. I’m a winner, and that’s the main goal. If I do that, everything else will take care of itself. I’ve just got to control what I can control, and that’s my play on the floor.”

Mission accomplished, so far. But there’s still tons of basketball left to play.

The upper echelon of our first edition of the Kia Race to the MVP Ladder features many of the usual suspects, including four former MVPs in Curry, Giannis Antetokounmpo, Kevin Durant and Nikola Jokic. Keep in mind that you can expect this list to change weekly as stars rise and fall with the ebb and flow of what should turn out to be a heated competition this season for the Kia MVP award.

Heading into a matchup Saturday against the San Antonio Spurs (8 p.m. ET, NBA League Pass), Antetokounmpo has scored 30 or more in three of Milwaukee’s first five games, including a 40-point, 16-rebound effort in a loss Wednesday to the Minnesota Timberwolves. After the game, Anthony Edwards called Antetokounmpo “unstoppable.” There’s not much else you can say about a player that slices through four defenders in Edwards, D’Angelo Russell, Jaden McDaniels and Jarred Vanderbilt to throw a self-lob off the glass for a two-handed jam. Just sick.

With Kyrie Irving out of the mix and James Harden struggling somewhat to find his footing in the face of the NBA’s new foul rules, it’s up to Durant to carry the 2-3 Nets through this current bout of inconsistency. Brooklyn hasn’t yet put together consecutive wins going into Friday’s game against the Indiana Pacers (7:30 p.m. ET, NBA League Pass). “Yeah, we do miss Kyrie,” Durant said. “He’s a part of our team. But for the most part, like I said, we’ve been generating great shots. We’ve been getting into the paint. It’s just a matter of us knocking them down. I think it’ll come.” We’ll see.

Slow starts in back-to-back outings haven’t stopped Morant from performing superbly when the stakes are highest. “Starting out early, we didn’t come out ready to play,” Morant admitted after Thursday’s win over the Warriors. “But everyone knows the Grizzlies, man. We play to the end.” Morant proved as much in spinning past Andre Iguodala and Andrew Wiggins for a left-handed layup with 57.9 seconds remaining to cap Memphis’ overtime win against Golden State. Prior to that, the Grizzlies had dropped six of their last seven regular-season outings at the Chase Center.

Similar to last season, the reigning MVP appears to be flying under the radar somewhat in the overall debate concerning this award. But we won’t let Jokic sneak up on us again. The Nuggets star left Tuesday’s loss to the Utah Jazz just before halftime after banging knees with Rudy Gobert. Up to that point, Jokic had reeled off 24 points on 8 of 9 from the floor to go with six rebounds and six assists. Denver officially listed Jokic as questionable for Friday’s game against the Dallas Mavericks (10 p.m. ET, ESPN).