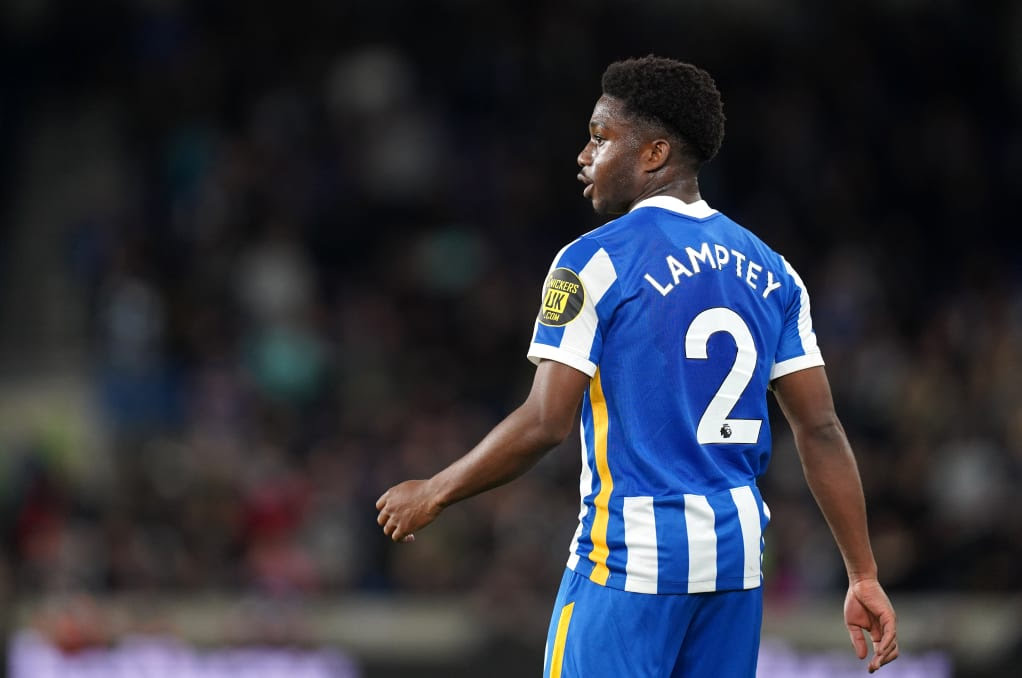 After a two-week hiatus, The Stolen XI is back! This week’s team that we’re looking at Liverpool to steal a player from is Graham Potter’s Brighton team who have exceeded most people’s expectations by currently being in 5th position in the premier league.

There are three players that I would like Liverpool to look at stealing and these are: Tariq Lamptey (21), Yves Bissouma (25) and Neal Maupay (25). These are three of Brighton’s key players and are some of the reasons why they are where they are performing the way they are.

Tariq Lamptey is a young right back with bags of potential, receiving multiple appearances in England’s youth team set up and racking up 22 senior appearances for both Chelsea and Brighton.

Unfortunately, Lamptey has had an injury riddled career and it feels as if as soon as he gets into a good run of form, he gets an injury which stops his momentum.

When he has been starting for Brighton however, he has produced top class performances and has been a standout player in a somewhat mediocre Brighton side from previous years.

Lamptey has only scored one professional goal in his career, although, he has been predominantly played as a defensive right back in the Brighton team.

Lamptey would be able to help out with Liverpool’s lack of depth at right back as Neco Williams hasn’t quite got to Premier League standard yet and the ever reliable James Milner isn’t fast enough to keep up with the speed of some of the elite level wingers in the league.

Another one of the players I would like Liverpool to look at ‘stealing’ is Yves Bissouma, he’s the self-proclaimed “best midfielder in the league” and has been the anchor of Brighton’s team since his move from Lille in 2018.

Without Bissouma’s engine, Brighton would not be the team that they are today, he not only creates chances but he finishes them off too.

He has hit the back of the net three times for Brighton with his most memorable goal coming against Blackpool in their FA Cup matchup on the 21st January 2021.

Bissouma would be a good match for Liverpool’s style of play as he is a box-to-box midfielder that helps out in both defence and attack. He would be able to provide cover for players such as Naby Keita, Thiago Alcantara and Alex Oxlade-Chamberlain.

Lastly, Brighton’s main goal threat Neal Maupay is next on my list for players Liverpool should steal as he is a clinical finisher and has been the head of Brighton’s attack for the last couple of years since his reported fee to be in the region of £20 million.

He warranted this price tag as he had one of his most prolific seasons in his career for Brentford in the 18/19 season.

Maupay, however, is notoriously hot headed whilst most recently being in an on pitch dispute with ex-Arsenal player Matteo Guendouzi where the Frenchmen clashed heads at the end of the match due to a tackle that Maupay had made on Guendouzi’s Arsenal teammate Bernd Leno.

Maupay came out after the incident and said he never meant to intentionally injure Leno.

Maupay would fit Liverpool’s team really well as he would be able to get into the key positions that the striker would need to be in to finish off the created chances from Liverpool’s endless pool of talent.

With all these facts and stats considered, I feel that the player that would help Liverpool out the most at this moment in time is Tariq Lamptey. He is a young prospect with premier league minutes already under his boot. He could learn from Trent Alexander-Arnold and become his ‘prodigy.’