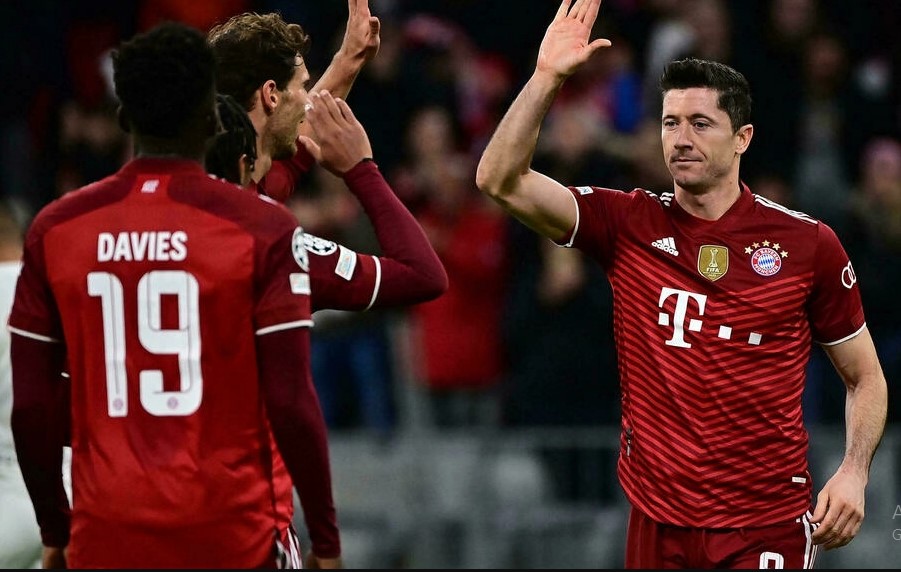 Robert Lewandowski marked reaching the milestone of 100 Champions League appearances with a hat-trick on Tuesday as Bayern Munich punched their ticket for the last 16 with a 5-2 home win over Benfica.

Lewandowski, Serge Gnabry and Leroy Sane scored for Bayern at the Allianz Arena while Benfica’s Morato and Darwin Nunez netted for the visitors.

Lewandowski, who also had a penalty saved, has now chalked up 81 Champions League goals and 100 appearances since his competition debut for ex-club Dortmund a decade ago.

Bayern’s fourth straight win in Europe guarantees them a last 16 place with two group games left as they hold a six-point lead at the top of Group E.

This was Julian Nagelsmann’s first game back on the Bayern bench as the head coach missed the previous four games after testing positive for Covid-19.

Bayern had an early scare when Manuel Neuer was beaten by a Lucas Verissimo header, but replays showed Benfica captain Pizzi was offside.

Lewandowski headed Bayern into the lead after Kingsley Coman turned his marker Alejandro Grimaldo, then floated a chip to the back post on 26 minutes where the Poland striker was waiting.

A second goal followed six minutes later when Benjamin Pavard lifted his pass over the defence which Lewandowski played to Gnabry, who backheeled past visiting goalkeeper Odysseas Vlachodimos.

Yet Bayern didn’t have things all their own way.

Morato gave Benfica a lifeline before the break when he met Grimaldo’s cross at the far post.

It was the first goal Bayern have conceded in four Champions League games this season.

After replays showed a Leon Goretzka shot was blocked by Verissimo’s forearm, Bayern were awarded a penalty but Lewandowski hit a weak shot straight into Vlachodimos’ grateful arms as it stayed 2-1 at the break.

Bayern pulled away four minutes after the break when Sane volleyed in their third goal, set up by winger Alphonso Davies on his birthday – 21 years after he was born in a refugee camp in Ghana.

Lewandowski chalked up his second goal when he motored into the area and fired home on 61 minutes.

Yet the hosts were guilty of coasting and when Marcel Sabitzer gave away possession, Benfica counter attacked at speed with Darwin Nunez finishing the move to make it 4-2 on 72 minutes.

However the night belonged to Lewandowski who wrapped up his hat-trick six minutes from time with a lethal chip.