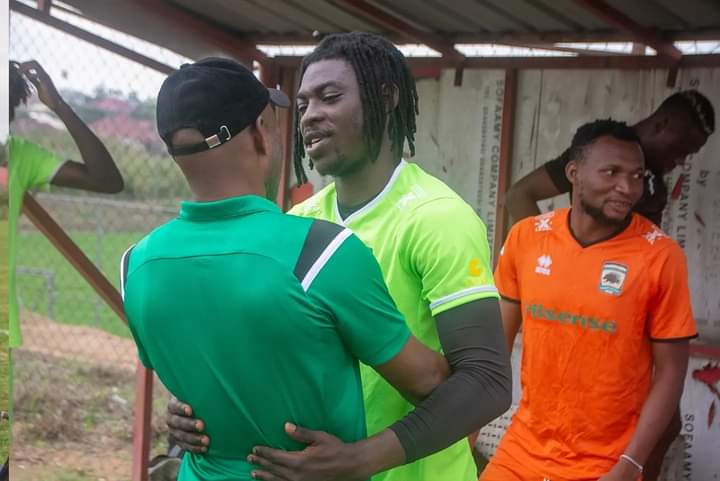 The gaffer was believed to have been given a day off to attend to some pressing issues and returned on time to spearhead the second training session of the week.

With Kotoko seriously preparing to play their first home game at the Baba Yara Sports Stadium on Sunday against Bechem United, 31 players were present just like on Monday.

Players like Fabio Gama, Razak Abalora, Kwame Baah and the trio of Mudasiru Salifu, Isaac Oppong and Richmond Lamptey who scored on Saturday to help Kotoko defeat Dreams FC were all actively involved in the training session.

Assistant coaches David Ocloo and John Eduafo began the training session with the players before Ogum took over to guide the players in practicing tactics and formations that can be deployed against Bechem on Sunday.

Andy Kumi, who scored a hat-trick during the Monday training session, was once again on target after he combined with another player.

Dickson ‘Yaw Dick’ Afoakwa who also scored a brace on Monday bagged a hat-trick this time around to the joy of the few supporters present.

Kotoko have announced the gate fees for the game against Bechem and VVIP section is going out for 100 cedis while popular stand and centre line are 30 cedis and 40 cedis respectively.

The price of tickets for the Wing side of the stadium will be 50 cedis and there will be an advance ticket sale at several places to be announced later by the club.

Bechem top the log with three points, tied on the same points with Kotoko but they have a superior goal difference.

According to sources, Bechem United players took their COVID-19 vaccines on Monday and will begin serious training on Wednesday morning.