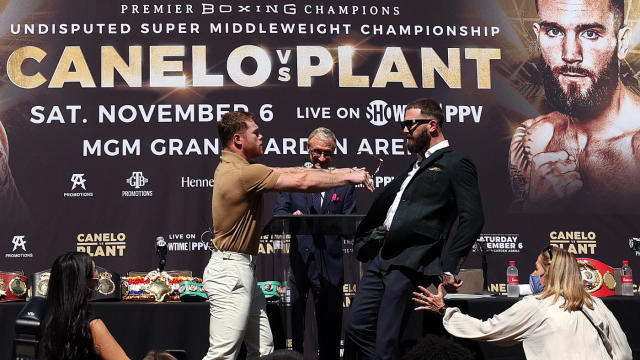 It’s once again Fight Week in Las Vegas. Sin City is set to play host to the biggest star in all of boxing when unified super middleweight champion Canelo Alvarez looks to achieve undisputed status in the 168-pound division against IBF champion Caleb Plant. It all goes down on Saturday, Nov. 6, from the MGM Grand Garden Arena in Las Vegas and airs live on Showtime PPV.

Alvarez holds the WBA, WBO and WBC championships. He added the WBO title to his collection in his most recent fight, a face-breaking stoppage of Billy Joe Saunders in May. Plant has held the IBF title since January 2019, taking a decision over Jose Uzcategui. Since winning the belt, Plant has made three successful title defenses.

After failed negotiations to make the unification bout for September, both sides were able to come to terms to make the bout official for November. Bad blood has built between the two sides, leading to a scuffle at a press conference. After a staredown, Alvarez shoved Plant and Plant tried to respond with a few punches. However, it was Plant who was left with a cut under his eye from return fire from Alvarez.

Below is all the latest information for the 168-pound showdown and how you can watch the action set for the MGM Grand Garden Arena in Las Vegas. Plus, the latest fight card news and rumors with the latest odds provided by Caesars Sportsbook.