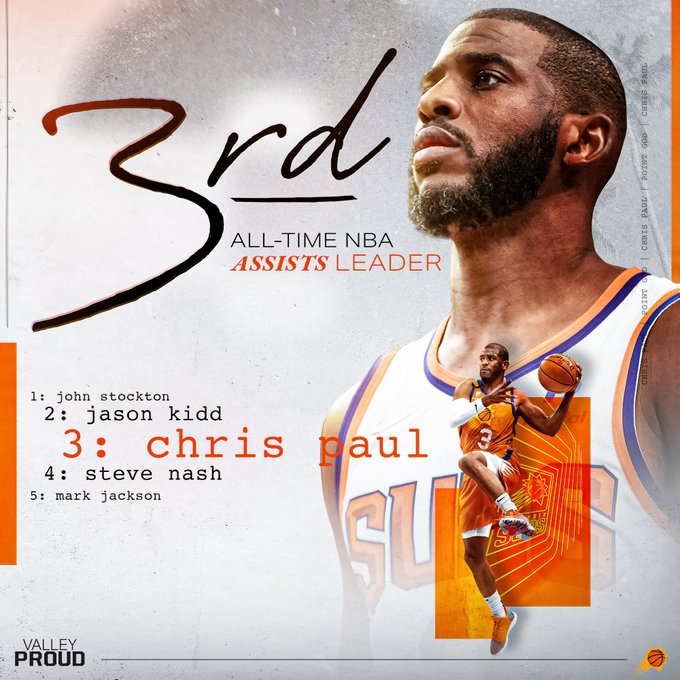 In just the first three weeks of the 2021-22 NBA season, Chris Paul has already achieved multiple milestones. To start, he was named to the NBA’s 75th Anniversary Team. Days later, the 11-time All-Star became the only NBA player to reach 20,000 points and 10,000 assists which he did in the Suns’ 115-105 victory against the Lakers.

And Tuesday against the New Orleans Pelicans, Paul notched his 8th assist in the second quarter to surpass Steve Nash for third place on the NBA’s all-time assist list.

With 1:34 remaining in the second quarter, Paul delivered a pass to Jae Crowder, whose 3-pointer gave Paul his 10,336th career-assist. The superstar point guard now trails only John Stockton (15,806) and Jason Kidd (12,091) on the all-time assists list.

The 36-year-old finished the night with 18 assists along with 14 points as the Suns rallied for a 112-100 victory over the Pelicans on Tuesday night. Paul now tallies 10,346 career assists.

The 16-year veteran point guard handed out 10 of his 18 assists in the second half and scored 12 of his 14 points in the fourth quarter to help the Suns steamroll the Pelicans down the stretch.

“It means a lot,” Paul said. “I’m grateful and I thank God for this opportunity. Not just to be on this team or still in the league, but just to be playing. I don’t take that for granted.”

“I’m just inspired by it honestly,” Suns guard Devin Booker said. “Been a fan for a really long time. It’s really fun to see, it’s really fun to be a part of it. A long time from now, I’ll be able to say I got to play with Chris Paul.”