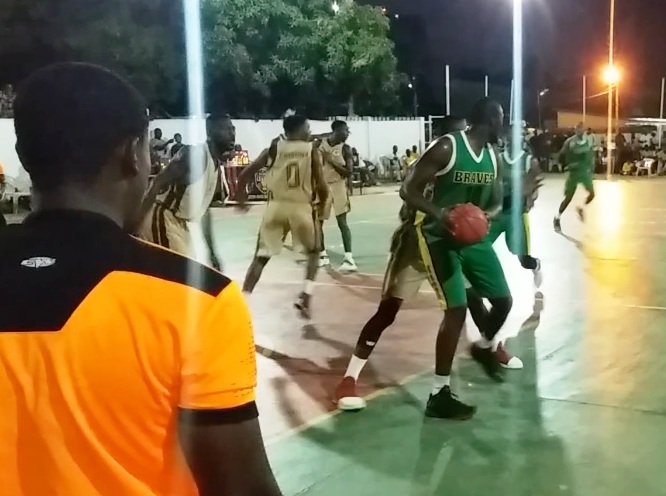 The 2019 League Champions paid dearly by falling to a 58-76 loss to Reformers at the Prisons Court in Cantonments in Accra. New Ghana Basketball Association President and Treasurer Aurora-Toppar were present at the venue to witness the game.

Braves need to beat Reformers in Game 2 to avoid missing on another league title; a Game 2 win sees Prisons clinch the title amid a dominant run. Tonight’s loss is Braves first in almost two years in the league after falling 57-65 to Adenta Leopards on November 15, 2019

Zamon Alhassan and Ayana proved to be the scoring outlet for Braves and Ayana’s battle inside the paint against Agyei caught the eye.

Amotoe produced a highlight two handed fast break dunk. Aziz put Reformers up 34-32 with 2:10 minutes remaining. Aziz and Abraham Allotey scored one of two free throws respectively to close out the half with Prisons leading 37-32. Despite the lead, Reformers got dominated on the boards by Braves and conceded a handful of second half opportunities.

Gabriel Ashaley was introduced in the second half and scored his first points off an assist from Amotoe. Daniel Aryee assisted Dodzie’s shot and Aziz scored a jump shot to give Reformers a seven point lead.

Ashaley responded by scoring off a missed shot but missed out on completing a three point play after getting fouled on the shot attempt. Prisons scored points from the free throw line to gain a 61-46 lead heading into the final quarter.

Abubakari scored for Braves in the final quarter’s opening possession but fouled out after just two minutes. Braves got a Kwatey three pointer in response to Amotoe’s three point run.

Reformers held a 67-52 lead with 4:14 minutes remaining and Ashaley added to that lead by bagging a layup off a long pass. Mutaleeb Alhassan and Allotey traded three pointers. Amotoe’s two handed slam ended the game.