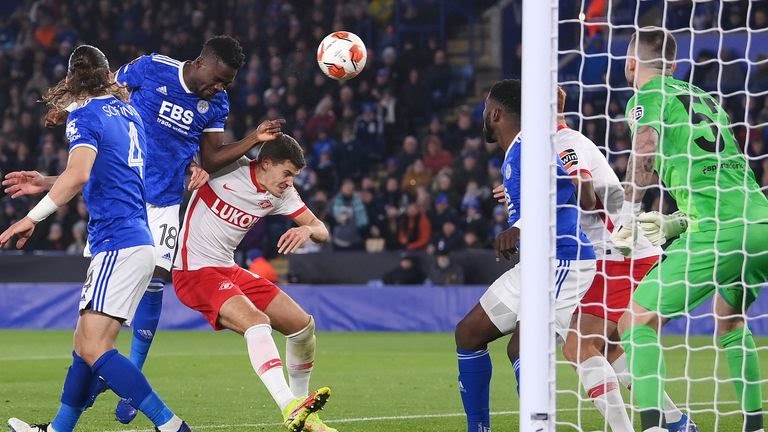 Ghana defender, Daniel Amartey was the hero as Leicester City salvaged a point at home to Russian side, Spartak Moscow in the UEFA Europa League on Thursday night.

Nigerian star, Victor Moses gave Spartak Moscow the lead but the Ghanaian rescued a 1-1 draw for Leicester City who won the reverse fixture 4-3 in the Russia capital a fortnight ago.

Moses broke the deadlock at the King Power Stadium in the 51st minute with his first goal of the season.

The former Chelsea and Liverpool midfielder nodded in Mikhail Ignatov’s cross to give Spartak Moscow an advantage of beating Brendan Rodgers’ men in their own backyard.

Unfortunately for the Russian visitors, it did not take long for Leicester City to respond as they grabbed an equaliser through Amartey. The Ghana star turned Ayoze Perez’s assist into the back of the net with his header in the 58th minute.

It was the third goal scored by Amartey for the Foxes since his signing from FC Copenhagen in 2016 and it was also his third Europa League effort, having previously scored two goals in his former club.

Leicester City had a chance of completing the comeback in the 75th minute with a penalty opportunity but second-half substitute Jamie Vardy who replaced Zambia’s Patson Daka, failed to beat goalkeeper Aleksandr Selikhov.

Spartak Moscow held on for a vital point on the road with Moses playing from start to finish for them.

Leicester City, on the hand, had Nigeria’s Kelechi Iheanacho in action for the entire duration while his compatriot Wilfred Ndidi made his return from injury as a 58th-minute substitute for Ayoze Perez.

Ademola Lookman was also in action as a second-half substitute for the hosts.

As a result of the draw, Leicester City remain in the third spot in Group C with five points after five games while Spartak sit at the bottom with four points.

In the other Group C outing, Napoli came from behind to defeat their hosts Legia Warsaw 4-1 without red-hot forward Victor Osimhen.

Second-half goals from Piotr Zielinski, Dries Mertens, Hirving Lozano and Algeria’s Adam Ounas got the job done for the Serie A club in Poland.

The victory helped Napoli displace Legia Warsaw as group leaders as they now have seven points from four matches.