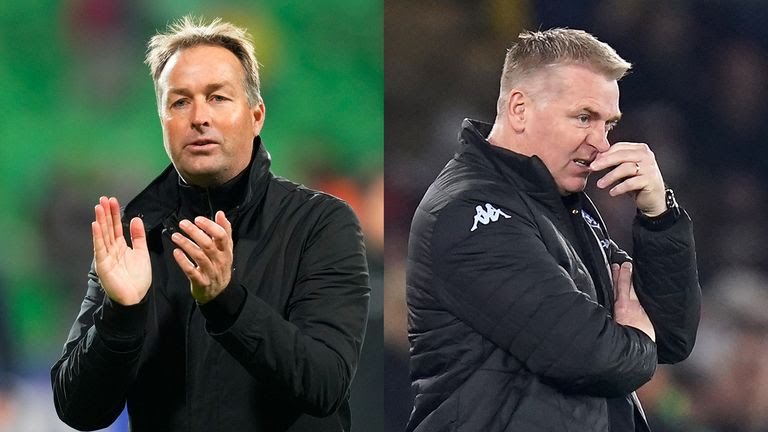 Chief executive Christian Purslow says the club have opted to make a change during the next international break after “not seeing the continuous improvement in results, performances and league position” on last season.

Smith, who returned Villa to the top flight in 2019, steered them to an 11th-placed finish last season and they spent almost £90m on new players in the summer, while selling star player Jack Grealish to Manchester City for a British-record £100m.

But as the November international break approaches, Villa are 16th and just two points outside the Premier League’s bottom three following Friday’s 1-0 defeat at Southampton.

Villa have not yet settled on a favoured candidate and will conduct a thorough process to evaluate who will be their next head coach – but Hjulmand is well known to Villa sporting director and fellow Dane Johan Lange.

Hjulmand helped galvanise Denmark to a Euro 2020 semi-final against England after Christian Eriksen’s cardiac arrest in the group stage, and he is expected to be considered alongside a number of others.

Rangers boss Steven Gerrard and Southampton head coach Ralph Hasenhuttl have also been linked with the vacancy already, after Smith became the fifth Premier League manager to lose his job this season.

With a two-week gap until the team’s next fixture at home to Brighton on November 20, the Villa hierarchy feel they have some breathing space and will not rush the new appointment.

There is a feeling that whoever takes over must be of the right calibre to coach Villa to the next level, however, with a squad capable of competing regularly at the top end of the Premier League.

Lange, who enjoyed a similar role with FC Copenhagen before he was brought to Villa Park, will lead the club’s search for a new boss, alongside CEO Purslow.

In announcing Smith’s departure on Sunday, Purslow said: “After a good start to last season, this year we have not seen the continuous improvement in results, performances and league position which we have all been looking for.

“For this reason we have decided to make a change now to allow time for a new head coach to make an impact. The process of replacing Dean will now begin and the club will update supporters in due course.

“When Dean joined us in October 2018 our team was really struggling in the Championship. He immediately transformed the atmosphere and performances and achieved the ultimate success of leading Villa back to the Premier League within the same season – a rare feat.

“The board would like to sincerely thank Dean for his many excellent achievements, on and off the pitch, during this time.

“Everyone knows how much Aston Villa means to Dean and his family. He has represented the club with distinction and dignity – universally liked and respected by everybody associated with Aston Villa – our staff, players and supporters alike. We wish him the very best.”

“Under owners Wes Edens and Nassef Sawiris and chief executive Christian Purslow, backwards steps will not be tolerated.

“On top of the five defeats, Villa’s performances were concerning. In those 450 minutes, they played well for an accumulative hour, but 40 points gained from their last 36 games will be the real reason for Smith’s sacking.

“Smith has struggled for a settled XI this season; from day one he insisted Ings could play alongside Ollie Watkins, experimented with a back five and had initial success, but by the time he reverted to a back four, confidence was rock bottom.

“Emi Buendia has struggled to recreate the form that warranted a £38m price tag, and the defence that kept 15 clean sheets in 2020-21 looked jagged.

“Like many clubs’ support, there is a chasm between social media reaction and match-going atmosphere. Those at St Mary’s on Friday night started the evening singing Smith’s name, but ended it wondering what was next in a season that had promised progress, despite the Grealish sale.

“Many will believe the club had to act soon before a relegation battle became a real prospect. Others feel he has built more than enough credit in the bank for more time.

“They’ll be hoping a ready-made replacement is waiting in the wings: it’s difficult to see who, at this stage, but a week is a long time in this Premier League season as the managerial merry-go-round continues.”