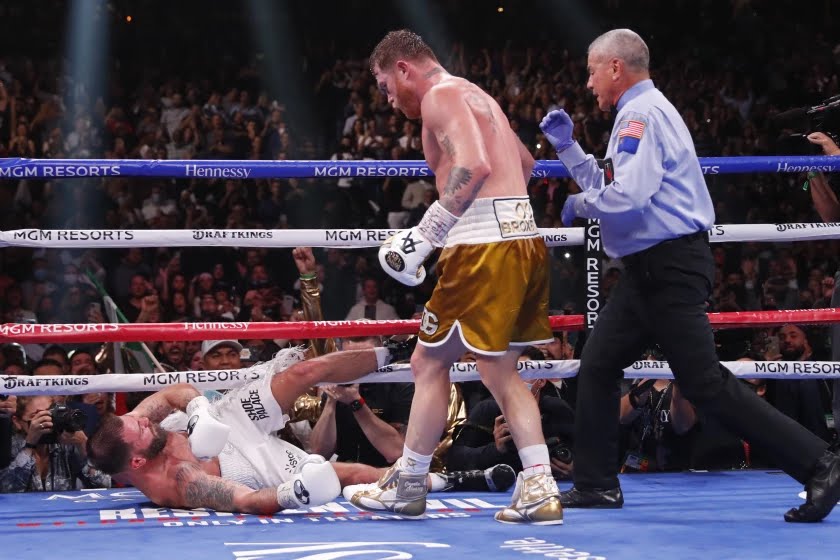 Álvarez (57-1-2, 39 KOs) added Plant’s IBF title to his own WBC, WBA and WBO belts with a steady tactical performance culminating in a brilliant display of his vaunted power to finish the previously unbeaten Plant at the MGM Grand Garden Arena.

The Mexican superstar generally recognized as the top pound-for-pound fighter in the world became the sixth man to be a four-belt champion, and he joined junior welterweight Josh Taylor as the only current undisputed champs of their weight class.

After stopping three of his previous four opponents, Álvarez had to grind through a difficult matchup with the tenacious Plant (21-1), who usually moved backward and worked behind his jab to stay away from Canelo’s power.

Álvarez remained persistent and racked up a volume of quality punches — and in the opening seconds of the 11th round, he sent Plant crashing to the canvas with a vicious combination followed by an uppercut while Plant tried to duck away.

Plant got up unsteadily, and Alvarez dropped him again with two big right hands, forcing referee Russell Mora to end it.

Canelo Álvarez poses with his trainers and his championship belts after defeating Caleb Plant on Saturday.(Steve Marcus / Associated Press)

Plant is a sturdy champion and an inspirational athlete who overcame numerous personal tragedies to earn a shot at the pound-for-pound champ, but the Tennessee native found out just how big the gap remains between Canelo and his contemporaries.

Álvarez is the first Mexican fighter to reign undisputed atop a division, and every flag-waving fan in the vehemently pro-Canelo sellout crowd of 16,586 seemed aware of the achievement. The champion, a Guadalajara native, spoke frequently before the fight of his determination to achieve the feat both for himself and for Mexico.